I was not expecting to cook over the weekend, but the heat of Sunday evening and the lure of the kitchen got the better of me.

We have been having a clear out and re stock in the kitchen, herbs and spices from Steenbergs recently purchased have included Sumac, Za’atar, Dukkah, Turkish Oregano, Spearmint from Egypt so opening the herb and spice cupboard is like an unknown journey across the seven seas!

The boss had taken our son out on sunday, leaving me to relax in the quiet and finger through some recipe books whilst listening to some hedonistic holiday anthems. Titanium, Bom Bom and Loca People hit the walls and ceilings with vigour, whilst in my head I was in far off places, Egypt, Lebanon and Tunisia.
It was soon evening and what to eat….Shakshouka was the answer.
The word means mixture if you believe wikipedia, and mine was going to be a blend of a couple of recipes from two of my favourite chefs, you know who I am talking about.
We had some Toulouse sausages in the fridge, these were de-skinned and put into a bowl with copious quantities of Sumac, Oregano, Chilli flakes, Habanero sauce (just a few drops, hot hot hot!) mixed with a fork, and left to marinate for an hour or so.
After an hour, the meat mixture was rolled into small balls, dusted with flour and fried in olive oil for a couple of minutes to brown, then set aside on kitchen paper to drain. 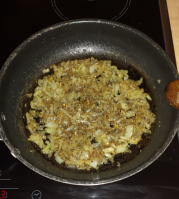 Next, an onion was chopped and added to a frying pan with some olive oil and butter, cooking slowly for about 20 minutes. After 20 minutes, I added some Salt and Pepper, Za’atar, a pinch of Sumac, chopped Garlic, fresh Coriander seeds and Cumin seeds. Quantities are according to your taste, as sometimes I find recipes need more than stated but its your chance to experiment. Remember you cannot take out but you can always add more, so taste as you go if unsure…..
I thought we did not have any peppers in the house, but remembered that I had been given a jar of roasted peppers as part of a christmas present, they came to the rescue and having been roasted and de-skinned already were absolutely perfect. Chopped into approx. 1cm pieces they were added to the pan and cooked for about 5 minutes, stirring from time to time. 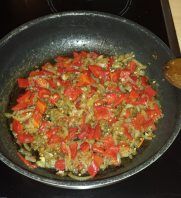 Transfer the mixture to the two bowls, ensuring the meat balls are around the outside enabling an egg to be broken into the centre, and shrouded by the piquant tomato sauce. Then put into the oven and bake for about 20 minutes until the eggs are set, but yoke still runny.
My version of the Shakshuka was served with some nutty bread and tasted delicious. Small balls of meat that were full of garlic and punchy spices, mellowed by a slightly sweet but flavourful sauce with the egg adding both texture and richness.  To finish I sprinkled some Parsley and Sumac over the top which you can see in the picture at the top of the page.
So there we go, another trip to the Middle East and a journey well worth taking. I am not travelling so much this week so hoping to get back in the kitchen and experiment some more.
il-hanā’ wa ash-shifā (May you have your meal with gladness and health)