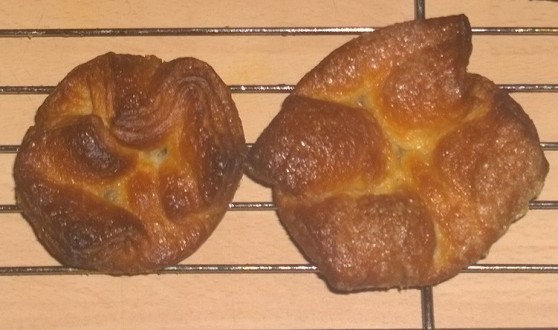 Twitter is an interesting tool that can inspire cooking at a instant. A case in point happened to me recently when a very good cook I ‘follow’ Sabrina Ghayour, tweeted a picture from a trip to Paris. The picture was of a variant of Kouign Amann, a Breton pastry from Northern France.

The sticky buttery rich pastry just looked amazing, and as I had a team meeting coming up after the weekend, an excuse to do some research and find a suitable recipe set me going online and attacking the keyboard. My initial concern was time, having made puff pastry by hand before it was a lengthy process taking up to 3 days (allowing plenty of rest time makes it very special), and this was based on a similar process.

A ‘speedy’ way to make a version of the pastry, I set about gathering the ingredients and digging out the food processor from under the cupboard.

The basic premise of this recipe is to incorporate loads of salty Breton Butter (readily available from Waitrose and probably larger Tesco’s) into flour using the method described on the web link above. Once it has had some time to rest and cool down in the fridge, a series of folds to create the layers that puff up and expand when cooking. This is a yeast based dough so the final result is croissant like in its texture.

The last stage requires dusting your work top with sugar instead of flour, which will create the lovely sticky, crispy, caramelised outside after cooking is completed. It was surprisingly straightforward to do, following the steps carefully. I changed one element of the recipe, which was to use vanilla infused sugar to add an extra dimension to the dish.

I couldn’t work out a way to easily get the shape from the original ‘tweeted’ picture so continued to follow the instructions on the website which requires you to cut the final dough into squares, and bring together from the centre, placing into a well oiled muffin tray as above.

They need about 40 – 45 minutes, I had some extra dough left, had some placed on an oven tray beneath the one above and a couple of them went to far! Keep and eye on them for the last 10 or so minutes as you want them dark and sticky, but they can soon burn.

Give them a go, they were bloomin’ delicious!

This week involved a lot of travelling, Newbury to Solihull, then Leeds, then Norwich, then back to Newbury so a couple of overnights would be needed.

My stomach dictates when away from home and gives me the chance to experience new food and restaurants, this week it was to be Tharavadu in Leeds and The House of Thai in Norwich.

Tharavadu is a Kerelan restaurant, a style of cuisine I had not tried before, rich in coconut and spices, and absolutely delicious. 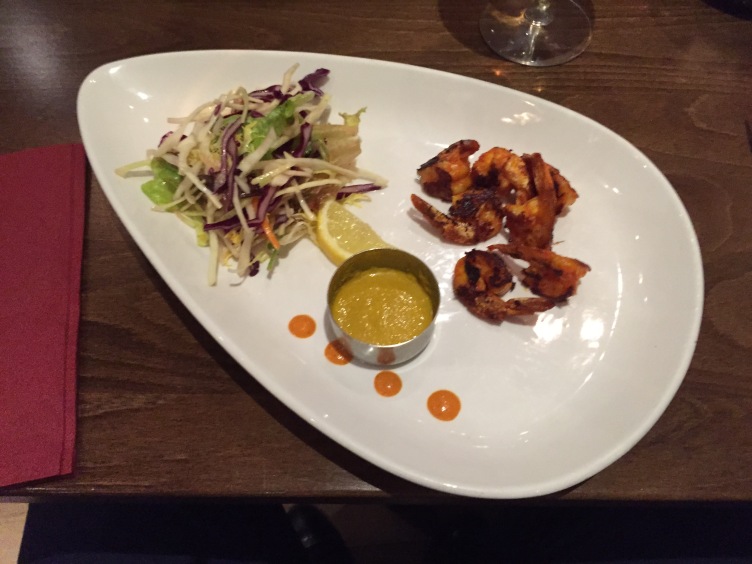 The starter I chose was Adipose Chemmeen, marinated Prawns served with a Lemon Chutney it was amazing, tingling the palate with lots of flavour, it set the scene quite nicely.

Mains were Kerala Khozi Curry, Mambazha Pulisshery, and a Paratha. I was too busy eating this delicious meal to take a picture, but it was very very tasty indeed.

Desert was a Semolina based dish, Pineapple Kesari, studded with raisins and cashew nuts it finished the meal nicely.

The wine choice was very good and reasonably priced, I went for a Trimbach Gerwurztraminer which countered the spicy meal perfectly. The service was excellent, attentive but not overbearing, and the restaurant was busy, busy busy, so book ahead if you fancy a culinary trip to Kerala, well recommended, please give it a go.

After Kerala, my next stop was Thailand, via House of Thai in Norwich!

I had been late arriving at both restaurants as traffic had been particular bad, but have to say VERY impressed at how accommodating both places were.

Starters at House of Thai were Tung Tong, or Golden Parcels, again an amazing starter, getting the taste buds ready for the main course.

The parcels are filled with a herb marinaded chicken and vegetable mixture, wrapped in a thin pastry and fried until crispy. Great starter…….yumm

I struggled picking a main, I have eaten Thai a few times and wanted to try and find something a bit different, so Pla Kra Pao was my choice of crispy Sea Bass with stir fried oyster sauce, served with fresh Thai Red Chillies, Coriander and Basil leaves. Thai Jasmine Rice worked with the Bass nicely it was very good value for money.

Desert was interesting as an iPad was used to show pictures of each of the dishes, a really good idea.

Dessert was Banana based, and studded with Coconut, not too sweet but something I had not eaten before, very tasty and I forgot the write down the name. Wine to accompany was a Marlborough Sauvignon Blanc.

The whole meal was very tasty, service was very good and unhurried (considering I was 45 minutes late!), another cracking experience, well worth a look out if you are venturing to Norwich add this to your must do list. 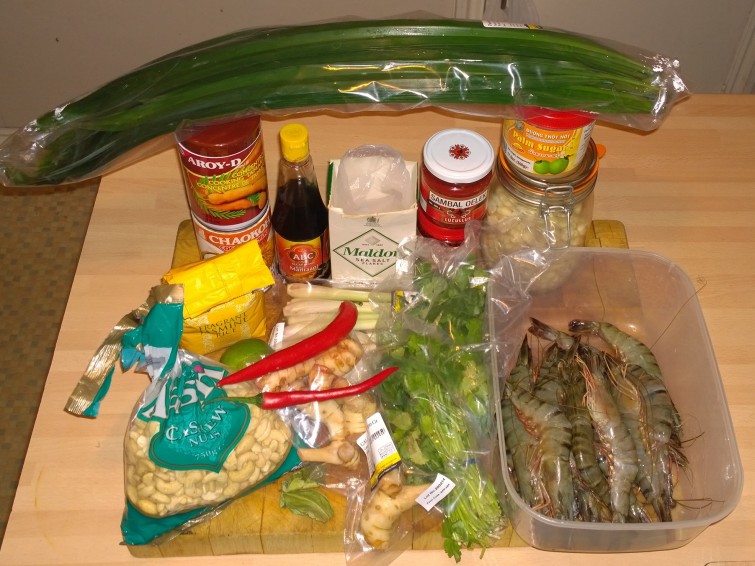 The urge for something tasty, I ended up driving to our local Oriental Supermarket and sought out some appropriate ingredients, such as Pandan Leaves (also known as screwpine), Thai Birds Eye Chilli’s, and some massive Prawns, the dish is called Assam Heh, or Nyonya Prawns!

This tasty number gets it roots from a mix of two cultures, China and Malay who merged through the 15-17th Centuries.  The cuisine is often referred too using the term Nyonya, which apparently means ‘women’.

The Prawns need marinading in a mixture as follows;

I had removed the shell of the Prawns but left the head on, removing the long tentacles and legs to neaten them up. Marinade for a least 1 1/2 hours in the fridge to let the Prawns soak up the flavours.

After marinading, the Prawns just need to be fried on both sides, on a really high heat with a good glug of the marinade to cover them and make them sticky and yummy!

The accompaniment for this treat is Nasi Lemak, a Rice dish cooked in Coconut Milk and Pandan Leaves, which is served with a Boiled Egg per person, some Cucumber, some roasted Peanuts and a couple of Sambal’s or relishes, to add more intense heat and flavour.

I had some Jasmine Rice in the cupboard, and just followed the instructions on the packet, substituting Coconut Milk for Water, and adding 3 Pandan Leaves to the pot, you can see them above nestling away!

The other elements were in part, a cheat. I had some Sambal Oelek (you CAN find it in supermarkets) and bought some Sambal Ikan Bilis (which has anchovies in it), boiled a couple of Eggs, roasted some Peanuts, and scooped out the centre of 1/2 a cucumber after running a peeler along the outside 4 times leaving a gap between each to create a light and dark green pattern, you can see it in the finished dish.

The only critical thing to watch is timing, making sure the cooking of the rice is timed to the cooking of the Prawns. The dish is quite straightforward but absolutely delicious to eat, if you don’t have the confidence to try some of the more challenging dishes on my blog, this one is easy, you can google the Sambal names and  find recipes to make your own if you have the time.

The finished dish presents very well, I finely chopped a Thai Birds Eye Chilli and scattered on top of the Rice, which was moulded in a small round souffle dish before turning onto the plate

That’s it for this time, next is a quick Breton sweet dish that is really delicious to eat and a couple of restaurant reviews.