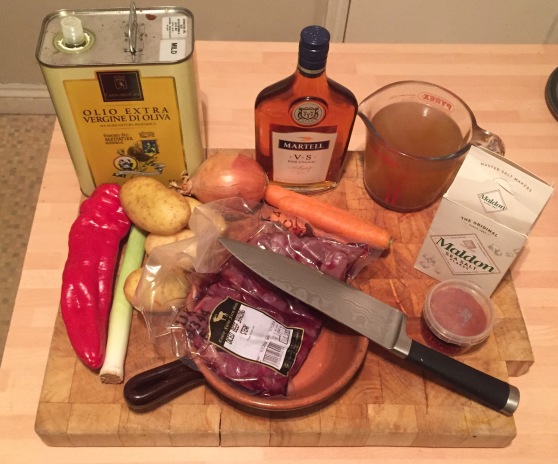 It’s been a tough week, mostly due to a nasty virus and being off food which for a ‘foodie’ is somewhat challenging. Our induction hob recently gave up on us, and it has taken some time to get a new one sorted, we’ve been using a portable gas stove with those ‘hair spray like’ blue cylinders in the interim which has been interesting!

Encouraged by a new fitted hob (a NEFF Induction again) it was time to cook something and Spain seemed a great place to turn too for something that is relatively simple, but very tasty and ideal for someone who had spent a lot of the week being sick!!

Sukalki is one of many delicious recipes in José Pizaro’s book, Basque. A traditional Beef stew, but flavoured with Cognac it’s a dish that is very popular in the Basque region of Spain with competitions taking place to prove who can cook the best. It’s a great book and well worth the investment.

Another reason for picking this recipe is that I wanted to try a new pan I had just purchased from Netherton Foundry in Shropshire. It’s handmade, and built to last unlike any other pan I have seen not cast and heavy, but spun and amazingly light for an Iron pan. It’s naturally non-stick, due to the use of Flax (Linseed) Oil which is lightly coated and ‘cooked’ for an hour similar to seasoning a wok. I had ordered a ‘Prospector’ Casserole Pan with Lid, and a Frying Pan too.

Once you have browned the Beef to seal, put to one side and start work on the Onion and Carrot, I added a small leek to my dish as I had one that needed using up and thought it would add another dimension and increase our 5 a day intake.

Using the Prospector Pan, you need to make sure it’s hot first, to ensure the natural non-stick surface works. One of the big advantages of this piece of kit us that if you accidentally damage the surface, you can just go through the seasoning process and you pan is as good as new, try that with a traditional PTFE non-stick or enamel coated pan!

The vegetables need a decent glug of Cognac, 150ml if you are cooking for 6 – 8 people. I did vary the recipe slightly, the leeks were not in the original, and I used one of those long sweet peppers usually stuffed which I finely chopped, and also a teaspoon of sweet pimentón to the mix.

Add the Beef to the Vegetable mixture and carefully mix, the Sukalki is going to be braising for 3 – 3 1/2 hours slowly, once you have added some Beef stock to the pan. To accompany the dish I decided to prepare some ‘rustic’ Garlic Bread. Largish ‘chunks’ of bread, rough cut Garlic, LOTS of Olive Oil and seasoned well with Maldon Sea Salt and Pepper. 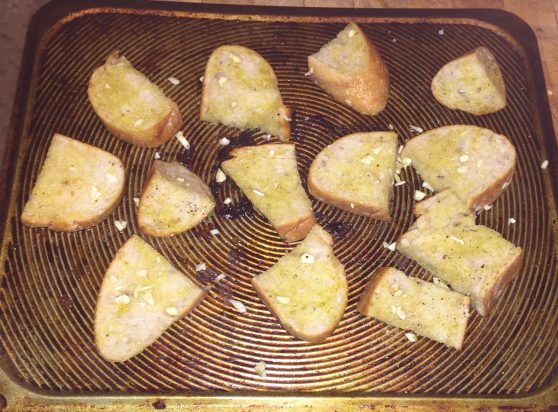 The smells that were coming out of the kitchen were making both me and the boss very hungry. I hadn’t eaten much during the week due to the bug so I was really looking to eating something simple but wholesome and hopefully tasty.

Towards the end of the braising, you need to add some Potatoes, a waxy variety that does not break up. This, to me is always a bit of challenge as potatoes don’t obey the instructions in cookery books and the cooking time depends on so many variables. Mine were sliced about 5 c.m. thick and needed a good 45 – 50 minutes to get to a point of perfect, just soft. Finally some Pea’s are added at the end to finish things off.

Excuse the messy plate! I was hungry and forgot to make things look ‘tidy’, but nonetheless the Sukalki was delicious, and I was hungry so it was soon eaten. I usually cook food that is ‘smack you in the mouth’ with herbs and spices, this is more delicate and rustic, great for a winters meal which is wholesome and filling.

José’s Book ‘Basque’ is available HERE. The Prospector Pans are available HERE. I paid full price for both and have received no incentive for this post. I am spending a day cooking with José in February at my favourite cookery school so watch out for the review next year.