I was in two minds as to whether I should/would post this particular recipe but looking on the internet and in the shops I decided I would do so. Driven by authenticity, ragù alla bolognese appears to have been changed out of all recognition with jars of artificial tasting sauces lining the supermarket shelves. One item that seems to appear in all the varieties I checked is SUGAR! yet the original 18th century recipe does not contain Sugar, nor Basil, nor Thyme, nor Oregano nor a ‘Firming Agent’, which seemed to feature in some of the jarred varieties.

This version of ragù alla bolognese is not exact, there is one ingredient I missed out (well forgot actually), the milk. I believe that adding the milk would have balanced the acidity from the Tomatoes but the judge of my cooking creations said it tasted fantastic, so I managed to get away with it!

This dish takes a MINIMUM of 2 hours to make, mostly in the slow cooking but the starting point is preparing a Soffritto or Mirepoix, a mixture of finely chopped Onions, Carrots and Celery. You can see how fine you need to go in the picture above, I used approximately 1 stick of Celery, half a Carrot and half a large white Onion. You also need to chop up 6 slices of smoked Pancetta, Italian cured Bacon. 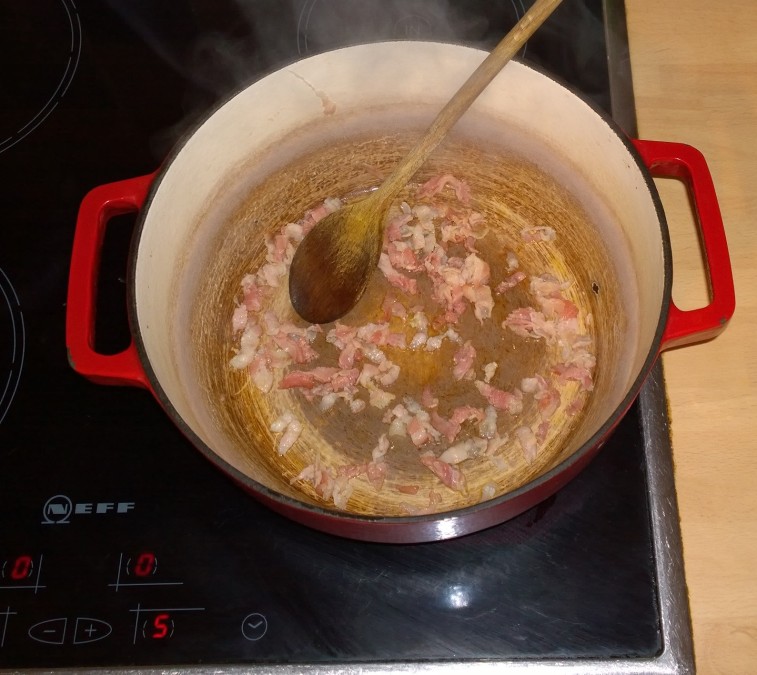 The Pancetta needs frying first in some Olive Oil, we use it a lot in our household and have found that the Organic Olive Oil from Riverford is very good value for money, originating from Puglia we use it quite a lot. A recent study has proved that next to Lard, Olive Oil comes 2nd in the ‘good for frying’ league with other oils such as vegetable coming lower due to their production of aldehydes when heated, you can find the details HERE, its really interesting. 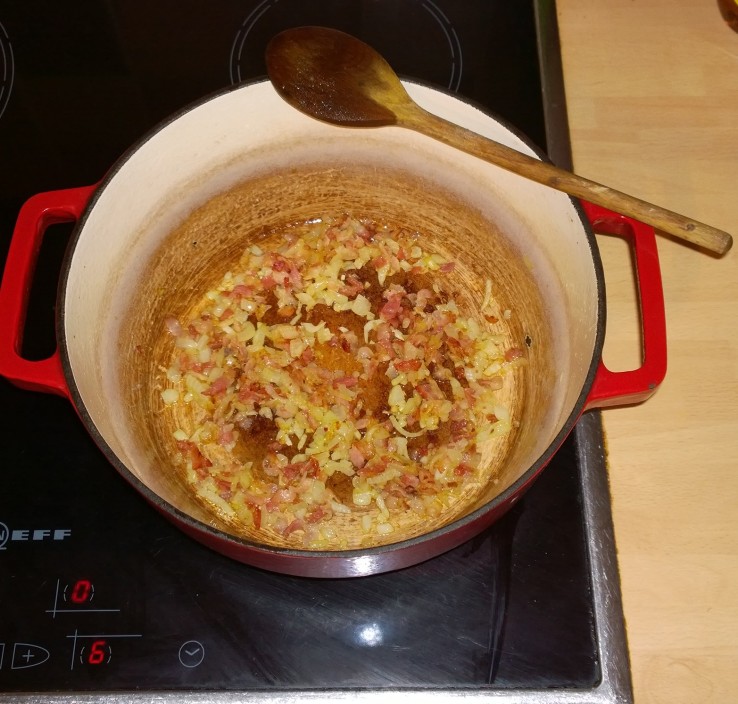 Once the Pancetta has crisped up, add the Onion and cook slowly for about 5 minutes , you want just a bit of colour as in the picture above, before you add the carrot continuing to cook on a medium heat.

Finally add the Celery and 2 Cloves of Garlic, I tend to grate my on a long Microban, which usually results in the skin being left behind and works better than any crusher I have tried, alternatively you can use some sea salt and a knife if you prefer.

I strongly believe food and cooking needs a lot of respect, what you put in, in terms of effort will repay you with great results.  So when you come to add the Mince (I used 1/2 Kg of Beef), please don’t ‘whack it in and mush it up with a spoon’, it only takes a few minutes to gently separate the grains and cook a bit at a time so you don’t get any clumps, it’s much nicer. Then add a tablespoon of Tomato Paste and cook out for a few minutes.

Now for the Wine, I chose a really nice Primitivo from Puglia, two decent sized glasses are needed, turn the heat up high to enable the alcohol to burn off, which should only take a minute or so, then turn the heat back down and add a tin of chopped Tomatoes, then season with Salt and Black Pepper.

You want a slow simmer, for about 2 hours in order to enable the sauce to thicken, I left my pot covered for the first hour with a cartouche over the ragù and uncovered for the second hour.

This meaty rich sauce is NOT served with Spaghetti (we are not making Spag Bol, it’s a British invention), the reason is because it does not have the surface area for the sauce to stick, you should be using Tagliatelle which is what is used in the traditional dish.

Mine took about 7 minutes to get to just ‘al dente’ which is what we are looking for, not soggy and sloppy.

So rather than use a shop bought jar of ‘stuff’ that bears no resemblance whatsoever to a ragù alla bolognese,  have a go at the real thing and delight those taste buds. Apart from some knife work and a slow cook it’s really easy and VERY VERY tasty so please give it a go, next time I might remember to add the touch of milk at the end……..

You should notice the picture quality has been resumed, thanks to my trusty Nokia 1020 Camera Phone. The weather has been pretty variable recently and by the time it comes to eat, the kitchen is too hot and I am, well, just not up to it. Recently, Rick Stein had a new book published to join a T.V. series, From Venice to Istanbul. I pre-ordered mine several months ago and it arrived on the day the book was released, the 1st episode starts on Friday 7th at 9:30 and I can’t wait to follow his foodie travels.

Thinking about the weather situation and thumbing through the pages I came across an interesting looking recipe that could be prepared in advance, and cooked last minute, Lamb and Pistachio Kofte, which would be served with Cacik and and a simple salad of Red Onion and Tomato. 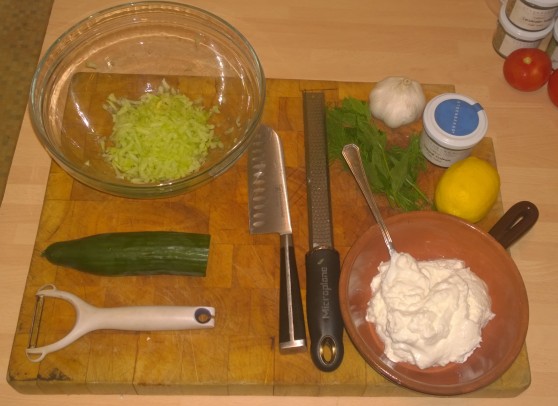 Cacik is a really nice side dish that you can adjust to suit your palate, and consists of mostly Yoghurt and Cucumber, in fact for two people I went for half a large cucumber, peeled and the seeds removed. It’s wise to add some salt (1/2 tsp) to the grated Cucumber to try and extract as much moisture as you can, I left mine for about 15 minutes before using a metal sieve and large metal spoon to push the remaining juice out. Half a tub of Greek Yoghurt made the bulk of the Cacik, added the drained Cucumber and mixing well.  You also need a clove of crushed Garlic, chopped Fresh Dill and Mint and some Cumin, and I also added some Lemon Zest, along with a teaspoon of Juice. You can adjust the herbs so suit, as I did. 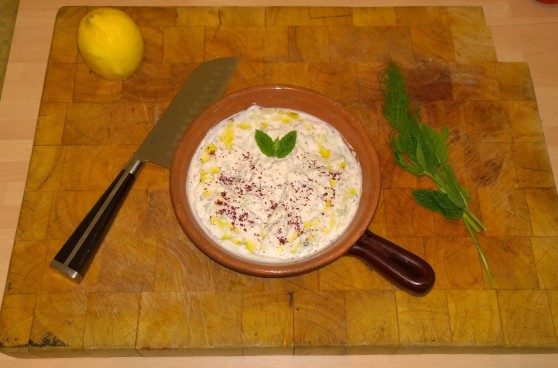 To Finish the Cacik off, I dusted the surface with Sumac and drizzled some Olive Oil before covering with cling film and popping in the fridge until needed. The original recipe in Rick’s book called for 1.2kg of minced Lamb, but that was to make 8 – 10 Köfte so I went for a standard pack of 500 grams. This is where things might get contentious as I did not change the other quantities of herbs and spices. I am convinced Chefs sometimes reduce the flavour impact in their recipes and I had cooked other dishes from well known chefs and to be honest, the food has been bland. So be brave and go the whole hog if you decide to have a go, 1 tsp Cumin seeds, 1/2 tsp Fennel Seeds, 1 tsp Coriander seeds did it for me from my favourite spice supplier Steenbergs. I make no apology for keep mentioning them, their products are top quality, Organic and sometimes Fair Trade too and compared to most of the stuff you get in the shops, there is just no comparison in the flavour quality. 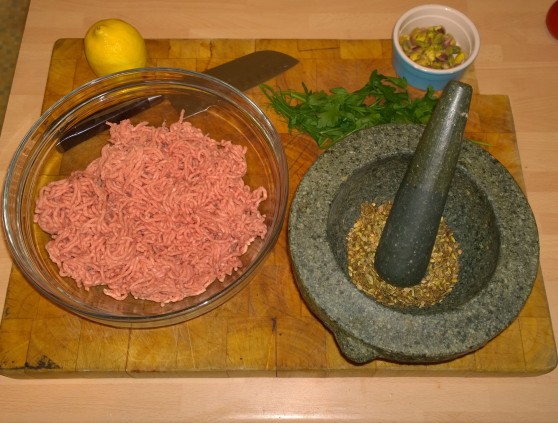 Something else I did differently was to dry roast the spices in a frying pan 1st, until I could smell the lovely aromas fill the kitchen before pounding in a pestle and mortar and adding to the minced lamb along with a grated large clove of Garlic.

Pul Biber or Aleppo Pepper comes from Turkey and Syria and is easily obtainable mail order from The Spicery one of my other suppliers, you need a teaspoon. The Pistachio’s need crushing gently, I used about 40 grams worth and some chopped Parsley, Mint and a little Salt and Black Pepper for seasoning along with the Juice of 1/2 and Lemon (and some grated zest too). Something not in the recipe was Sumac, I love the stuff so about 1/2 tsp went in, it has citrus notes and adds to counteract the fat content of the Lamb, the mixture is bound together with some beaten egg. The book says 2 and if the mixture is too wet add some flour. I took one beaten egg and added it slowly, no flour needed at all. At this point you could take a small amount of the mixed and fry up to test the flavours if you want too. Cover and put in the fridge until ready.

I was planning to make some bread but in the end went for some shop bought Pitta (Lame excuse but I have been off sick so shouldn’t over do it!), The next step was a simple salad, 3 Tomatoes chopped into chunks, 1/2 Red Onion thinly sliced, 1/2 a Green Chilli de-seeded and finely chopped, some chopped Parsley (or Coriander) and a dressing of Olive Oil and Lemon (add before serving), then season with Salt and Pepper. The Lamb is shaped into Sausages (to fit the Pittas), and fried gently until cooked. In the book they are shaped onto flat metal skewers but I did not have any to hand so just did it as you can see above.

The Pittas were damped with water and the top surface was brushed with some butter before putting in an oven on full to heat up, the result was better than normal and the Pittas did not end up like cardboard! Once cooked, put some of the salad inside the Pitta, add the Köfte then some more salad, add a good helping of Cacik and sprinkle some chopped Parsley over the top, add a slice of Lemon and serve.

The verdict, wowser, absolutely yummy. The boss said they were the best I had aver done which was nice. To me, the thing that stood out was that no ingredient was dominant and that it was like a flavour wave riding around your mouth. These are NOT spicy, just full of flavour, so if you fancy having a go, invest in Ricks new book as it is very good indeed.