After a good nights sleep, I was ready for breakfast.

On arriving at the separate breakfast dinning room which is part of the main building I opted to sit outside on long sharing table (I love this option).  There was a selection of fresh juices including melon, orange and pear.  Fresh croissants, pastries, tarts, homemade compote (I had the mandarin which was awesome). Nearly all the food came from the farm.

Giuliano was excellent again explaining some of the more unusual fruits that grow as the Masseria, especially one called loquat or Japanese Plum. Its like an small oval light orange fruit with a couple of seeds. When peeled it has a soft texture like pear and is light in flavour but slightly tart, which really made your mouth water. During our conversation Giuliano explained that the fruit turns black after a few days and they were going to have a go at making a jam from them. There was also home made cheese, and also fresh eggs, the best bit was NO FULL ENGLISH, yippee.

After breakfast I had some free time to relax before the 1st cooking lesson, so took time to wander around part of the farm. Beforehand, Giuliano explained about how the Masseria had been purchased 9 years ago after 45 years of neglect, and pointed out the different areas and their crops. We were stood by a ‘wild area’ which supported the most fragrant thyme, rosemary and wild rocket. We picked some, brushed off the dust and ate some, more bitter than the farmed stuff we get, but just amazing to be able to taste something so fresh and wild.

The abundance of Poppy is purposeful in Organic culture and is used as an insect magnet to draw nasties away from the ‘real’ plants, in this case the special grapes that are being grown to recreate a unique wine.

I walked for nearly and hour, and observed everything from Almond Tree’s to Figs.

At 11:00 o’clock I was met by Giuliano, Angelo and my tutor Anna-Rita for the start of the course, I was the only guest attending as its early in the season so I was in for a real treat as they had prepared a bespoke course just for me.

This morning we were making Orecchiette, a pasta made from Semolina and Warm Salty Water and shaped like a hat, a tomato sauce for the Braciola/Orecchiette , Braciola (Stuffed Veal), A Lemon Tart and Limoncello.

I was shown all the different stage and had my own area where I could observe and practice, there is a real skill in shaping the Orecchiette, book the cooking holiday to find out!

We went into the garden and picked the most amazing lemons fresh of the tree’s for the tart and Limoncello, the skins were quite thick and Giuliano made a simple salad, removing the center and dressing the skin/pith with Olive Oil, it was just unbelievably tasty.

The Tart was served in squares, still warm and dusted with icing sugar and a caramelized lemon slice in sugar syrup. The pastry was of the sweet variety, but with added yeast that gave it a light airy texture. We peeled the skins for the Limoncello, and added some of the leaves from the tree’s which add some colour. 95% proof alcohol is added to the skins and its left in a sealed jar for two weeks IN THE DARK. After, its filtered at least twice before added a sugar syrup solution to temper the alcohol. 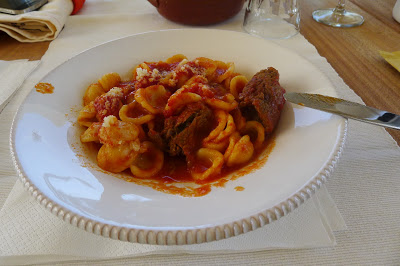 Orecchiette with Braciola and tomato sauce. We sat down and Giulians’s brother and mum and the receptionist joined us for lunch. It was a real pleasure to be able to learn some new skills and have some conversation about Puglia and the Masseria Montenapoleone.  I am off to Alberobello later today, a UNESCO site famous for Truillo, dome shaped houses. We are also visiting a Wine Museum and doing some tasting, and then for dinner at Braceria Fasano.
Buona Salute