This weekend I am having a couple of days extra off to spend time with the family,  spend time in the kitchen cooking, enjoy some good food and update the blog. 1st stop was Wookey Hole to go ‘Witch Hunting’.

Wookey Hole cave was formed through erosion of the limestone hills by the River Axe. Before emerging at Wookey Hole the water enters underground streams and passes through other caves such as Swildon’s Hole and St Cuthbert’s Swallet. After resurging, the waters of the River Axe are used in a handmade paper mill, the oldest extant in Britain, which began operations circa 1610, although a corn grinding mill operated there as early as 1086.

Having finished the guided tour, had some food in ‘Captain Jack’s Restaurant’ and played ‘Pirate Island Adventure Golf’,  number one son let off some steam in the ‘Pirate of the River Axe’ whilst we decided what to do next!

The village of Cheddar and Cheddar Gorge is about 8 miles from Wookey Hole, and the region is famous for Cheese, one of my favourite artisan products. Both the ‘boss’ and I adore cheese with a passion, and are very lucky to have a fantastic cheese specialist nearby who supplies some amazing product, not available in the usual retail ‘chains’. If you have never tried cheese from an artisan supplier please do, you will be amazed at the difference in taste, texture and longevity if looked after carefully.

The land around the village of Cheddar has been at the centre of England’s dairy industry since at least the 15th Century with the earliest references to Cheddar Cheese dating from 1170.

Next stop was the ‘Cheddar Gorge Cheese Company’, the only producer of Cheddar Cheese in the village of Cheddar!

If you arrive before 15:30 you can see see the cheese being made, unfortunately we arrived after this time so could not spend time in the viewing gallery watching the process.  I was lucky enough to visit an Italian Cheese Factory in May this year as part of a cooking holiday and its more interesting than you might think.

In the shop you can taste sample’s of their products, and they even have mini cool boxes with ice bags, so you can buy the cheese with confidence if you have a long distance to travel home.

I ended up buying several different cheese’s, some artisan biscuits, chutney and their own special cheese straws, the two pictured above were completely different, the ‘Cave Aged’ having more texture and being quite crumbly, whilst the ‘Vintage’ was strong in flavour, but more creamy and close textured. 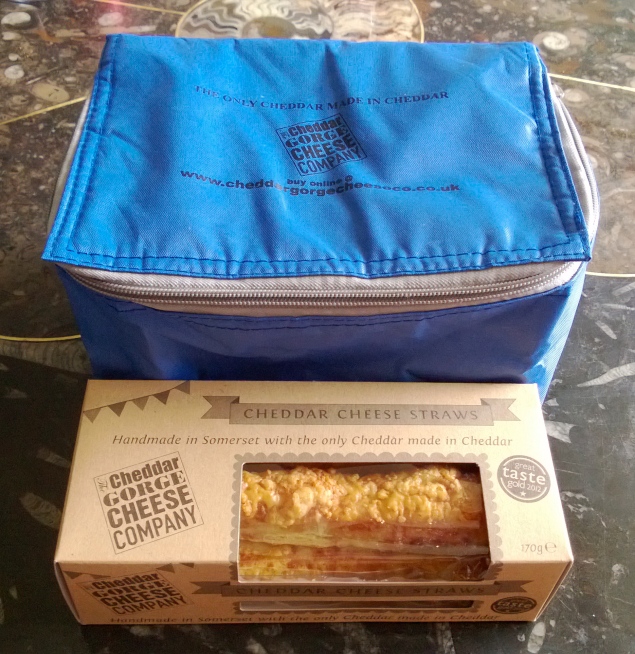 Saturday was chill out day, reading cookery books, watching cooking programmes and not thinking about work. Lunchtime was fast approaching and an excuse to spend time in the kitchen. Thomasina Miers had appeared on ‘Saturday Cookbook’ on ITV in the morning and my mind drifted to Mexico, Tommi is famous for winning MasterChef in 2005 and subsequently opening her chain of Mexican Restaurants called ‘Wahaca‘.

I fancied a bit of experimenting, so turned to the Middle East for my spice inspiration, but basing the dish on Mexican influences.

Starting off with some new potatoes of the ‘Agata’ variety, they were quartered and put into a frying pan with some Olive Oil and butter, cooking slowly for around 10-15 minutes. Then, finely chopped onion was then added with a good sprinkle of dried Thyme,  an Orange Pepper, pith removed and cut into small dice, a teaspoon of Aleppo Chilli Flakes from Ottolenghi’s, which I find has some citrus notes and decent heat,  some Ras el Hanout spice mix, mine is from Steenbergs.

Cook for a further 10- 15 minutes to soften, then add a couple of fresh chopped tomato’s and season with sea salt and pepper, mine looked like this;

The next stage was to take a couple of Tortillas, on one drizzle some olive oil, place the other on top and move round to ‘spread’ the oil on both Tortillas. Then, place the Tortillas oil up and sprinkle with Dukkah, the oil helps the spice mix stick. I then put the spiced faces together and fried the Tortillas in a mix of oil and butter until they puffed up.

These can then go on a plate in a warm oven whilst you finish the dish, which just needs a fried egg and some chopped parsley to finish. 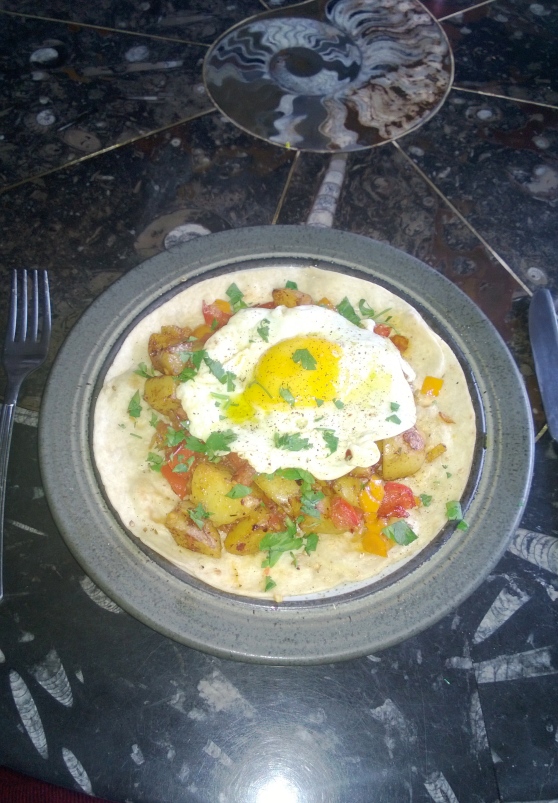 The fried Tortilla base with the Dukkah adds some crunchy texture to the final dish, the Aleppo Chilli and Ras Al Hanout a Middle Eastern theme, and it was really delicious.

The ‘boss’ was out when I cooked this, but I reserved some of the vegetable mixture and folded the Tortilla into a quarter, and it was devoured when she came home!

Thanks must go to Thomasina Miers, Yotam Ottenlenghi and Bethany Kehdy for the inspiration for this dish.