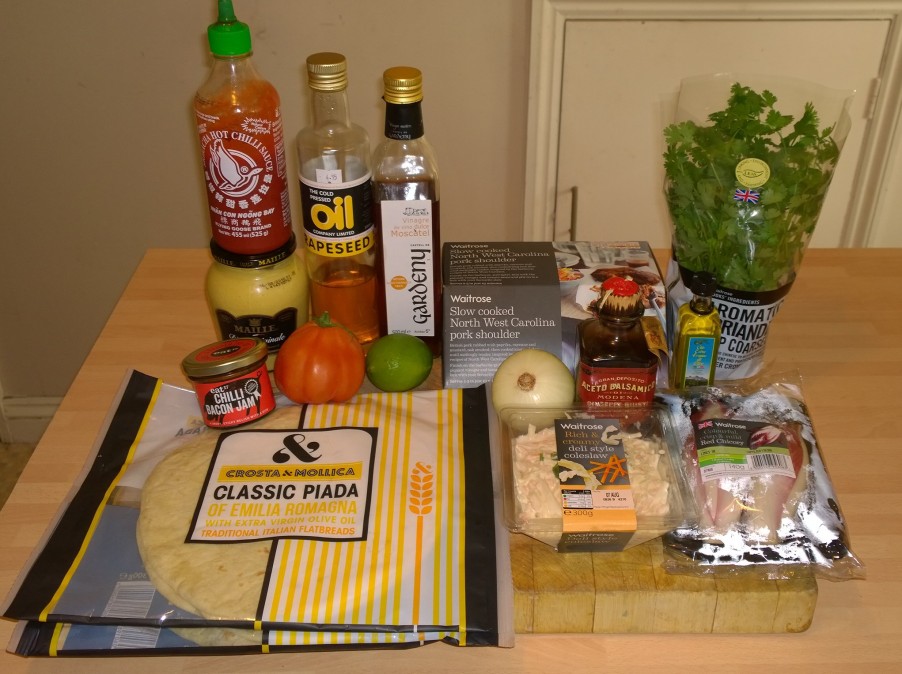 My Wife (of 25 years this August), had to go into hospital recently for a minor operation, just before last weekend in fact. My weekends are typically spent watching, reading relaxing and cooking in between playing with my 8 year old and trips out. I had been ordered by the Romanian nurse that that weekend had to be spent making sure the boss did nothing whilst recovering, so no time in the kitchen was to be!

On the Saturday evening we decided to have Roast Chicken on Sunday, but forgot to take it out the freezer! DOH. Sunday morning came and after some inspiration from Sunday Bruch care of Rebecca Seal, we headed off to Waitrose as my mind started to construct a dish, this had to be a speedy one as I was not allowed to leave the Boss for too Long.

As I wander around, I am mentally constructing a dish, getting inspiration from ingredients such as  North West Carolina Pork Shoulder (only needed to be shoved in the oven as it was already marinated etc.). Chicory, Coleslaw, Chilli Bacon Jam! Wait a minute Chilli Bacon Jam, never had that before so in the basket it went.

All the ingredients are in the above two pictures (White Sweet Onions have just appeared on the shelves as have Heirloom Tomatoes which you will need), the result was absolutely awesome, even though it was merely a construction job. The Coleslaw had added ingredients, Lime Zest and Juice, and some chopped Coriander and additional Black Pepper. The Chicory was partnered with a Dressing, 3 Parts Oil (Rapeseed) 1 part Vinegar (2 1/3d’s Moscatel to 1 1/3d Aged Balsamic). a Teaspoon of Dijon Mustard, Maldon Sea Salt and Pepper and well mixed and chilled. 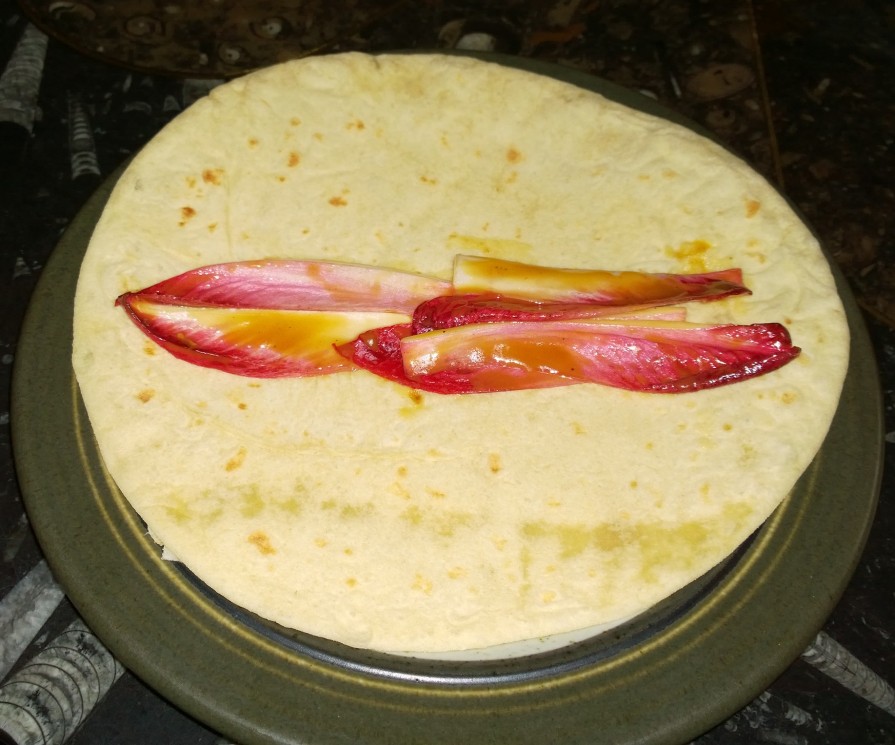 Dress the Chicory at the very last minute, I bought some Italian Flat Breads, they are much nicer than wraps, enriched with Olive Oil and a bit more robust. Place some leaves of Dressed Chicory as a bed for the next ingredients. The Carolina Pork only needs 30 minutes in the Oven, which gives you plenty of time to quickly prepare everything, this is a really quick dish to make.

Next, spread a thin layer of the Bacon Chilli Jam alongside the Chicory, and add some thinly sliced White Onion and Tomato on top of the Chicory as above.

Finally, add the pork, then layer some of the Zesty Lime Coleslaw and finish with a decent drizzle of Sriracha sauce which is available in supermarkets or online at Ottolenghi’s.

I had achieved a couple of objectives, spending as much time with the boss as possible, but also creating another tasty meal, but really quickly. The Chicory with Dijon Mustard Dressing was awesome, and could be a meal In its own right as part of an unusual Tapas, it was really delish..

So if you loved one has to go into hospital, you can still create really tasty food in no time at all.