January has been very difficult, Flu has been the significant event and I think I have seen Floyd cooking in India, The Far East, France, Italy and South Africa to name but a few! There is a common thread in many of the recipes he shows, the Mirepoix.

I am starting to get a bit more adventerous in my approach to cooking in that I am looking for ‘guidance’ when attempting something and then veering off-piste and seeing where I end up!

The Pie is one such example, cooked well they are a thing of beauty but make a mistake and yuch, and unless you can find a pie brand you really like going it alone and making your own is definitely the way to go.

I decided to use a home made rough-puff pastry using a Michel Roux recipe, it’s brilliant and only takes a few minutes to make if you follow the link HERE. I scaled down the amount as I was making a small(ish) Pie and went for 125g each of flour and butter.

The filling was Beef Mince and Peas, but the flavour started with a Mirepoix of Onion Carrot and Celery cut Brunoise (small dice), this was to feature a lot in Januarys cooking experiments. You just sweat the vegetables gently and not brown them, if you then add tomato pureé as I did, it becomes a pincage! I did add some finely chopped bacon before this stage to build on the flavour layers which adds a smoky element. Don’t forget to Season to taste at this stage. 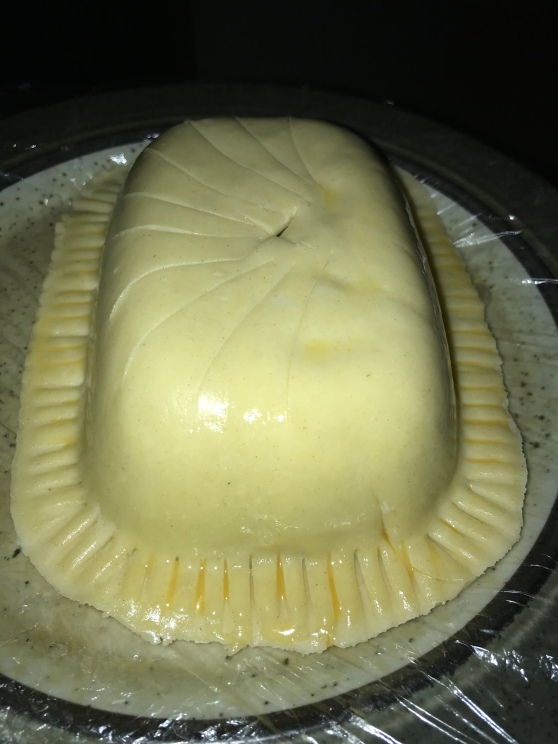 To shape the Pie I used one of those White Enamel tins, lined with some cling film after I had rubbed some oil over the surface, the Pastry was then laid into the dish on the film, add the (cooled) filling and cover. The Pie can then be (gently) lifted out, inverted and the edges sealed with a fork, It worked a treat as you can see above adding an Egg Wash to brown before cooking.

So back to our Mirepoix again, this time with a dish inspired from more distant shores, but first some mise en place. 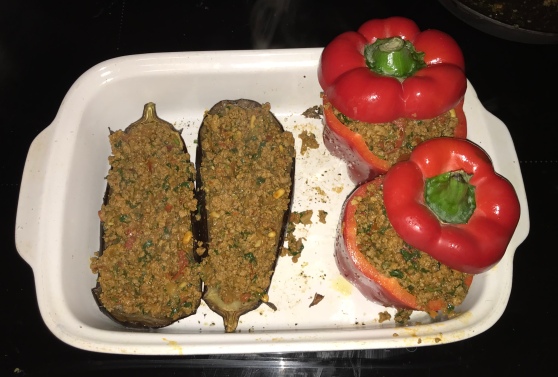 Stuffed Mediterranean Vegetables are another one of those dishes that can be ergh, nice or amazing. I’ve done them a few times but decided to see what could be done with some refinement and playing with flavours. Previously I have only done a Pepper version as they are easy, just cut the top off and bake with a filling, job done.

Let’s introduce the Aubergine into the recipe and look at the process of baking and using the centre as part of the stuffing. I used the paring (small) knife to gently cut around the edge of the Aubergine about 1 cm in, you can see in the top right picture, then carefully cutting a criss-cross pattern using the larger knife, remembering the shape and altering the depth as you cut, the middle is deeper than the edge!

Brushing liberally with Olive or Rapeseed Oil and seasoning with Salt and Pepper they were baked for about 30 minutes at 180 degrees. I turned them over flat side down and gave them another 15 minutes after another brushing of Oil as the top did not seem cooked, you can see the final result below. You then need to carefully scrape out the cooked centre and chop, ready to add to the filling later.

So we now start with the Mirepoix again, this time I swapped an Onion for a large Shallot, which is a bit sweeter. Add the Lamb and brown, some Garlic to taste, the chopped Aubergine, some Tomato Paste. Going for a Middle Eastern angle further enhancements included Rose Harissa, Coriander, Cumin and Preserved Lemon finely sliced and some chopped Mint and Coriander Leaf. Texture came with some toasted Pine Nuts.

I have not included quantities as I tasted as I went, so for example Cumin is quite Pungent, so I used less then Coriander Powder. Don’t forget to season with Salt and Pepper before moving onto the next stage.

The lamb mixture can then be used to fill the hollowed out Aubergine and in my case Red Pepper’s with the tops and pith/seeds removed, then baked in the over for about 35-40 minutes.

Served with some Greek Yoghurt with added Rose Harissa and chopped Mint its absolutely delicious and worthy of any dinner table as you can see below.

A new book came through the letterbox and hit the floor over Christmas, ‘Comfort’ by John Waite it’s a great addition to the bookshelf although it’s spent more time in my hands thumbing through the pages seeking more cooking inspiration.

I was looking for something different to try one Saturday and had Fish and Potato on my mind, remembering a recipe I found it in John’s book, but not having all the ingredients I slipped off-piste again and here is how it went!

Firstly, a baked Potato which I always start by piercing all over with a fork, and then rubbing butter all over the skin to ensure a crisp finish, followed by a sprinkling of Sea  Salt.

I had some red Romano Peppers in the Organic Veg Box so started to think about a nice Piquant Sauce to make, so popped one in the oven to roast for about 15 minutes, this makes removing the hard indigestible skin easy and heightens their sweetness.

The Mirepoix was again the starting point, this time the humble Leek was also finely chopped and added to the rest of the sweating vegetables. I also added some Plum Tomato’s from a tin, but removing the seeds by hand first so only the flesh went into the saucepan. Finally I added the roasted pepper which had been chopped up first. 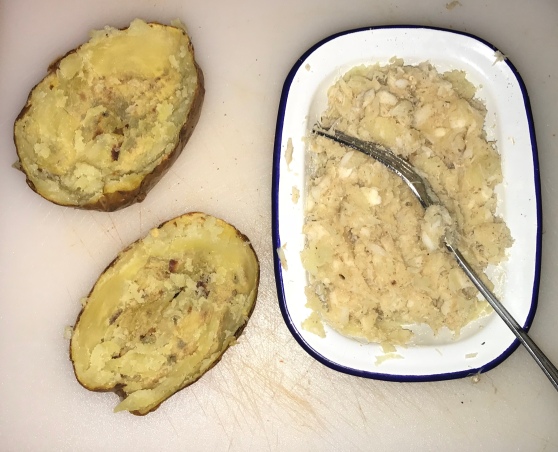 A couple of pieces Cod had been removed from the Freezer earlier and popped in the Microwave to cook, not ideal but time meant that it was the easiest thing to do and as the Fish was going to be mixed with Potato it was the way I went on this occasion. Once cooked it was mixed in with the scooped out potato and Ras-Al-Hanut spice added along with Salt and Pepper to season.

Once the Mirepoix/Pepper/Tomato mix was cooked it went into the Ninja processor and got a good whiz as you can seen above.

I wanted to add some more texture so used some old Sour Dough Bread to make Breadcrumbs, added grated Grana Padano Cheese and mixed in some Rapeseed Oil. 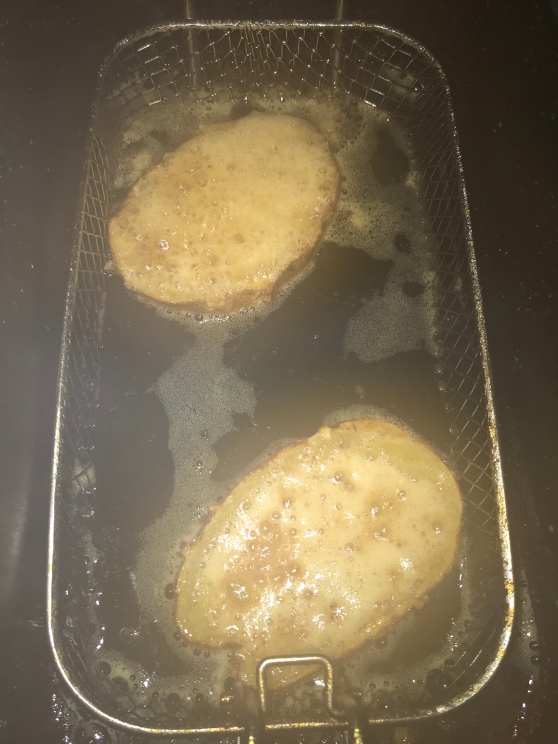 The Potato Skins were fried to make them crispy again, and then filled with the Potato?fish mixture before being topped with the Breadcrumbs/Cheese and going in the oven to finish. The sweet (piquant is more appropriate) Pepper Sauce was gently warmed on the hob and we were soon ready to serve.

So what started out as a John Waite dish (which I do intent to make), turned out as my own version with a quite spicy Sweet Pepper Sauce, with the crispy Potato and Fish filled skins it tasted delicious.

Next time I will cover off Mexican experiment and see where it took me and the Ox Cheeks, I hope you enjoy the January efforts and please feel free to let me know if there is anything you would like to me have a go at.