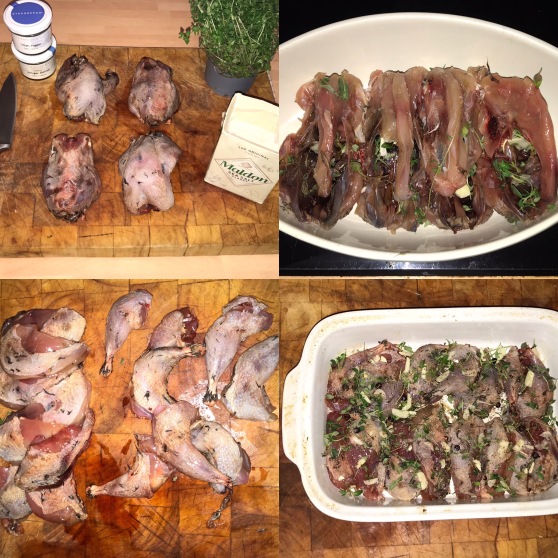 I have been taking a break from the blog and cooking in general to recharge the culinary batteries, and try and seek new inspiration from a number of foodie sources including books, cookery competitions on T.V. and researching produce and concepts.

I will apologise upfront, this is not a simple or quick recipe, it was prepared over nearly 3 days but, broken down in stages the amount of time actually spent in the kitchen is only a few hours!

This dish is inspired by an entry in the book NOPI, by Yotam Ottolenghi and Ramael Scully. Its a gorgeous book, full of dishes from the restaurant of the same name but subtly simplified to make them more accessible, but nonetheless they are still complicated.

Having read the recipe, description and processes my mind started to wander and think about my interpretation of what seemed a very tasty, but complex Filo Pie, with its origins from Morocco and the Savoury/Sweet Pastilla.

Our family LOVES game, especially Partridge and a recent trip to our local meat supplier Casey Fields Farm Shop in Ashampstead had allowed the purchase of a few birds which were really fantastic value for money. The plan was to section the birds, roast the carcass, make a Partridge Stock and confit the meat.

The work was planned to start on a Friday evening, but due to over running work wise I started on the Saturday morning, I have done some butchery over the years so the sectioning was done pretty quickly and I soon had a pile of breasts and legs which were placed in a dish with Garlic (about 3 chopped cloves), Juniper Berries (about 10, crushed), Maldon Salt (2 Tablespoons) and Selim Pepper (from Steenbergs), and some Fresh Thyme and covered with cling film before sticking the in the fridge until the following Morning.

The carcass’s were placed in a roasting dish, treated with Olive oil, Fresh Thyme and Maldon Sea Salt, before placing in a 160 degree (fan) over for about 2 hours to cook. After 75 minutes I put a halved red Onion in as the birds finished roasting. 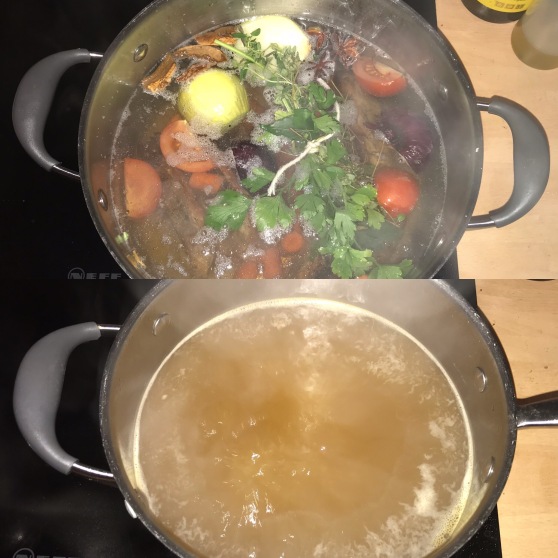 Once the roasting was complete, the carcass’s were put in a large pot along with the aromats and about 5 litres of water. I looked at the recipe for guidance as to flavours, it used Chicken Stock so I added some dried Porcini Mushrooms, Tomatoes, the roast Onion, Peppercorns, Star Anise and a ‘faggot’ of herbs, Bay, Parsley and Coriander. I didn’t add Salt until later, and to taste, and then sieved the stock removing all the solids, that was the Partridge Stock done!

First thing on the following Sunday morning I was up early and got the Partridge Breasts and Legs cooking, after washing off the Salt and marinade ingredients, at about 115-120 degrees, in plain oil.  Ovens differ so you want to see the ‘occasional’ bubble rising to the surface and may need to adjust the above temperature a bit. 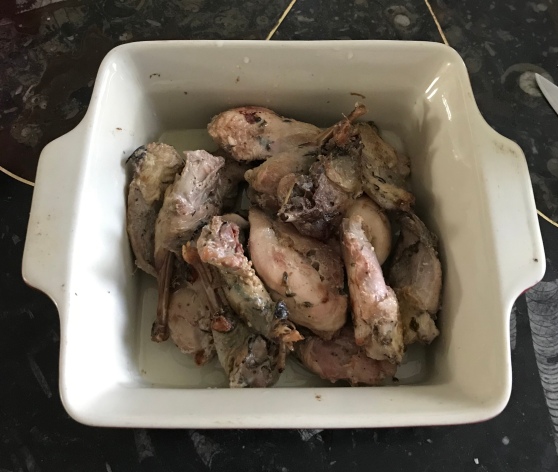 I let the meat cool down in the Oil for about an hour before removing, covering and sticking in the fridge whilst other stages were completed. The original recipe called for a layer of ‘Catalan Spinach’, which needed some Pine Nuts to be roasted and coated in Smoked Paprika, which only took a few minutes. There was also a Sweet/Sharp component made from some currants, steeped in warm Sherry Vinegar and Brandy until plump. 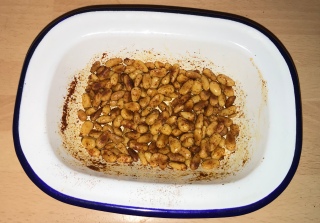 As you can see, there is quite a lot to do, a number of processes to complete and some great flavours being developed with the home made stock and various elements of the dish.

The stock was just the base for the intense and complex flavoured sauce that the Confit meat was going to be added to. Caramelised Onions and various other flavours were added to a pan and cooked down before adding some of the stock, which was then left to simmer for about an hour or so! If you want the recipe then the book NOPI is where to get it from , it’s a great investment for any keen cook. I used the recipe as a guide as I wasn’t using Chicken, so missed some of the stages that were not needed. 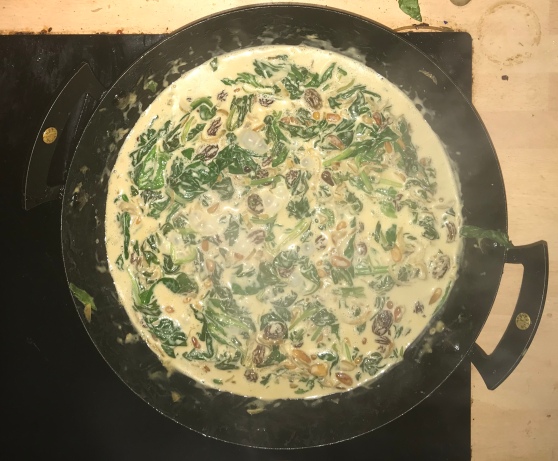 The second layer of the Pastilla was the “Catalan Spinach’, a creamy cooked down delicious combination of the Pine Nuts and Currants, Garlic along with Spinach and Double Cream. You need to ensure the mix is not too wet, otherwise the final result may make the dish soggy.

So, we have sectioned some Partridge, Roast the carcass’s and made a tasty stock, salted and marinaded the Legs and Breasts, and then done the confit treatment. Prepared the various ingredients for the Catalan Spinach and started to make the final sauce for the meat. Give yourself a MASSIVE pat on the back and SMILE, I certainly did!!

Again I did not follow the recipe and strained the sauce, then reduced it added salt and kept tasting until I felt it was rich and velvety. I picked the meat off the legs and pulled the breast apart into small pieces and then added the sauce to coat, not drench the meat.

We are almost done, and now its Filo time! I have two ‘favourite’ pan’s, from Netherton Foundry in Shropshire, they are made of spun iron, very robust and made to last. The ‘Prospector’ pan was to be my cooking vessel for the Pastilla (I used my Netherton frying pan to complete the sauce) so started by brushing some melted Ghee on the base (to help crisp the pastry), before layering several sheets of Filo pastry at 180 degrees to each other, slathering more Ghee on each layer as you can see above. Its quite delicate so be gentle with your brush as it can tear!

I used about 8 sheets of Filo for the size of pan I was using, overlapping each time to create overhangs that could be played back over, and then filled with the Partridge layer, you can see from the picture above that the mixture is not too wet, but the meat is well coated nonetheless. The Spinach layer was added on top of this.

Finally, lay a sheet in the middle of the Pastilla and gentle tuck the sides all around your pan, as you can see above. Your tucking in a blanket before gently bring the outer layers back over the top, brushing Ghee on each layer as its sealed, and you should end up with something similar to the picture below. Give yourself ANOTHER pat on the back!

Breaking down the dish into various stages slightly simplifies the cooking but it’s still a challenging dish to make and to be honest, I was pretty tired after what was a 2 day cooking event! I made things more difficult but choosing to use a Partridge Confit and kept double checking the processes to make sure nothing was missed, and where adjustments were made, everything was on track. The Pastilla needs to cook in the over for about 45 mins to 1 hour.

Pastilla is a Sweet/Savoury dish so needs finishing with a coating of icing sugar after it has been turned out of the pan (so the bottom is on the top). What was it like, my chief taster was very sceptical and was not sure that it was going to be any good, dead wrong, it was absolutely delicious and quite a surprise. We had some Harissa roasted Butternut Squash and a Cous Cous Salad with Feta, Pomegranate and Herbs and felt very satisfied.

So here is my Confit Partridge Pastilla, yes its a bit of work but break into stages and even I managed it, take a leap of faith and have a go yourself.

I’m off to Argentina in a few weeks for a trip with my employer and if there is anything good food wise to write about, it will get posted shortly after.