It’s been a while, too long in fact since I have donned a Chef’s apron and spent time learning some new skills and techniques of the culinary kind so the opportunity to spend a day with the Masterchef 2011 winner, Tim Anderson was too good an opportunity to miss!

The last (and only) time I have attempted cooking Japanese was in January 2016, a Katsu Curry type of recipe which blended Simon Rimmer (of Sunday Brunch fame), with the Hairy Bikers and it did taste very good, so posted it on the blog so I could repeat if needed.

The Bertinet Cookery School is in Bath, I have been visiting frequently over the last few years and been fortunate to spend some with some fantastic chefs. On the train journey in I searched YouTube for evidence of Tims’ cooking, other than the Masterchef series where I had seem him win in 2011, and found a few videos to watch and get into the mood.

There were 9 of us cooking and I teamed up with David and Jamal as we set to the various recipes that were given to us at the start of the session. We were going to cook some of the food in Tims’ new book TOKYO Stories, which is an excellent read as it guides you through the city like a food tourist, providing hints and clues as to how to get the most out of the ‘bonkers’ city. Thank-you David and Jamal for being great companions during the cooking experience, your company and chat was really nice and made everything so easy.

So how about ‘Noodles in a Bun’! Yakisoba Pan is just that, the finished dish is further up the page and consists of, yep, Noodles in a Bun. The trick is packing loads of flavour and texture into the Noodles and adding various accompaniments such as ‘Aonori‘ (Sea Weed strips), ‘Tonkatsu‘ sauce (like HP but better), ‘Kewpie‘ Mayonnaise (a richer umami hit than normal mayo) and pickled Ginger. it was surprisingly tasty and everyone was silent as we ‘chowed down’!

Tim gave us lots of anecdotes and talked of his many travels to the ‘bonkers’ city that is Tokyo which was fascinating, explaining how things work so buy the book and you will find out all about it. Menchi Katsu was another interesting wholesome dish, spiced Beef and Pork patties which were bound with Panko Breadcrumbs, Eggs Yolks and Cream. Coated in Panko and deep fried they were rich and juicy.

It was a very ‘hands-on’ day, lots of prep getting dishes to a point of readiness and then cooking at the last minute. One interesting dish out of the menu used Salmon ‘scraps’ cooked into fried Rice, a great way of ‘eeking’ the last inch of flavour out of waste that would normally be thrown away. Tim showed us what to do before we all set about doing our own. 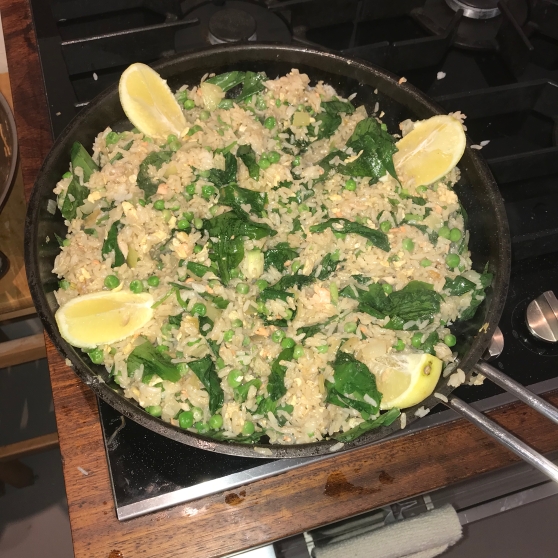 The sessions are always relaxed at the cookery school, but each ‘team’ creates a bond, shares life experiences and its amazing how you very quickly forget about the week before or think about the week ahead, there is a ‘bubble’ that you enter and its surprisingly relaxing, even though you are all busy, working together preparing great food.

We were progressing really well so our chef tutor Tim decided to go ‘off piste’ and chuck in an extra dish which he demonstrated to us. Monjayaki, a kind of Goo it’s just that, weird indeed, but, very tasty. It’s a ‘not omelette’ sort of dish, with various ‘stuff’, in our case Kimchi (made by the lovely Jen, head helper and overseer at the school), some sweetcorn out of a can, some spring onions and a ‘not quite batter’ which was the goo, finished with Mozzarella Cheese which melted and crisped at the edges. 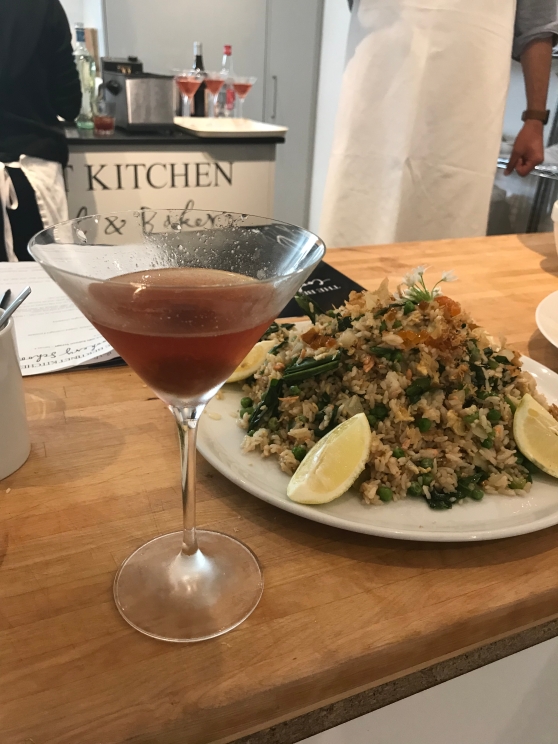 Another ‘treat’ was a cocktail using a Japanese ingredient, Umeboshi a  dried fermented Apricot kind of fruit. We all tasted a small piece, KAPOW! A bit sweet, a bit salty, a bit sour, in a intense kind of way it was………interesting! Muddled in a glass with Gin, Vodka, Dry Vermouth, Sweet Vermouth and in our case Byrrh it certainly packed a punch, slightly sharp and sour but very tasty and went well with the food.

So, another fantastic day with a great bunch of people all sharing a love of food. The Bertinet Cookery school is extremely well organised, properly equipped and always uses top quality ingredients. Tim Anderson was brilliant, made everyone real relaxed and showed an extensive knowledge of Japans food culture, another day I won’t forget, and new skills to practise in the future.

In 4 weeks I am off to France again to the French House Party on another culinary adventure and will be posting pictures on Twitter (@Julian_G4UET) Instagram (g4uet) and there will be blogs updates each day If I get time.

2 thoughts on “Monjayaki – A kind of Goo, and Other Japanese Deliciousness. Cooking with Tim Anderson of Masterchef Fame.”