Mind your fingers..! Monday starts the marathon session with Jean-Marc Boyer, our Michelin starred Chef tutor. Before I start, a massive bit shout out to the team at The French House Party, who clean, make tea, provide moral support at times of difficulty (joking). The well oiled engine behind the Chef’s make things run smoothly and efficiently.

Today we are going to prepare, and eat two 3 course meals, yep, 6 dishes on top of breakfast which was as usual, very tasty, and not just any old meals, these will be complex, challenging and intricate, so please read on.

Jean-Marc has a style, and manner which does not seem that of a Chef in a high pressure environment. He is methodical, relaxed and nothing is a problem! The starting gun is always paper and pen. There is always a recipe pack and agenda supplied by Moira, the owner of The French House Party; with timings to make sure everyone is ready to start at the allotted time, but it’s the way that each dish is described graphically that sets Jean-Marc above the rest. 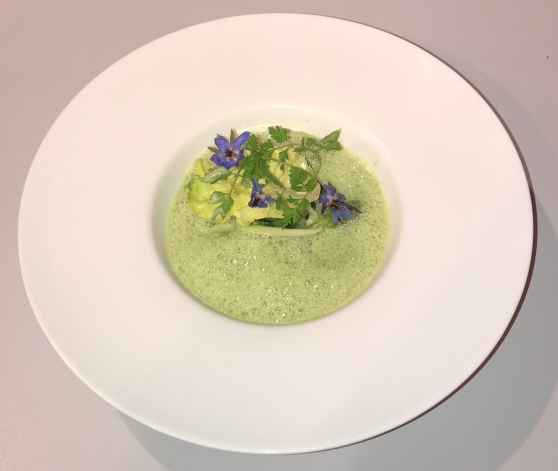 So, Lettuce Soup, yes…. you heard, Lettuce Soup and wow how delicious it was. The top right hand corner picture above is the architectural design. A thin strip of Courgette is punched with holes, ‘wild asparagus’ is prepared by cutting off the long stalk and placed through some of the holes. 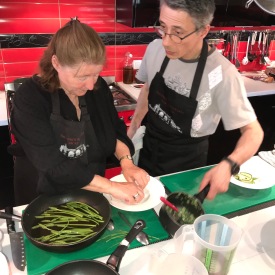 You can see the process we went through above, to produce the final dish which was delicate, intricate and divine, along with the unusual asparagus which none of us had seen before.

Jean-Marc’s approach is very much multi-tasking and whilst some were preparing elements of the soup, others were tasked with different jobs. I had the fun of removing fat and pin-boning the Salmon which was to be the main course after salting for 40 minutes then frying, then, after I had finished chopping Potato into fine matchsticks, Frank added it to a batter mixture and made ‘Potato Waffles’. Then there was a Tzatziki which required Cucumber to be finely chopped into little squares and mixed with various ingredients.

Ah, and we also made a ‘Basil Sorbet’ just for the fun of it. You can see the main course above, which whilst was a labour of love, tasted slam dunk. During the first session we had learnt so much about planning, prepping, cooking and plating, after a break we headed back into the kitchen and continued to prepare the evening meal!

I have just said farewell to Frank, Carolyn and Gill who are off to their respective next destinations, it’s Wednesday midday so I will be heading to Toulouse Airport shortly for my flight home.

There is more to come of this culinary gourmet exploration but I am back at work tomorrow and unlikely to get the story finished until the weekend. So please keep watching for more fun in the kitchen at The French House Party.