2014 has arrived and there is much excitement in my world. Last year I drove miles, thousands of them and it meant having to stay away more often than I preferred, which reduced both family and kitchen time. This year I am looking after a another team based in the south, so less travelling and some more excuses to adventure with food (and spend time with the family!).

I met the southern team last week, and decided to treat them to some home made baking, BUT one of them is a Coeliac which is an intolerance to Gluten. The only known treatment for this is a Gluten-free diet which is a bit of a challenge, if you check the packets of many ingredients the number that claim Gluten free is not massive especially if baking cakes and desserts!

I did some research and found a suitable replacement for flour was Polenta, which is Maize (Corn) ground into a meal (course Flour). Its not the same as conventional Flour so baking with Polenta requires some thinking. You have to be careful with other ingredients too, Baking Powder which is used as as raising agent can contain Gluten so check your packets 1st before embarking on this particular cake.

I made this in between customer meetings and conference calls so apologies as there are not too many photographs in this particular post (2 to be precise)!

I decided to bake a Pistachio and Cardamom Polenta Cake with a hint of Rose Water & Lime Butter Frosting, Middle Eastern inspired and something which was an ongoing development during the cooking process, here’s the final version, which was AMAZING, your will need the following ingredients!

The basis of the recipe were a couple of cakes I found on the Internet which had Semolina as the base and quite a lot of Rose Water, but could not be used as Semolina contains Gluten, hence the Polenta replacement.

I was a bit nervous about introducing too much Rose Water into the cake, as I think its definitely an acquired taste. I decided to add some further adaptions and significantly reduced the Rose Water component, but introduced some more Middle Eastern flavour in the form of Pomegranate Molasses. I also increased the Cardamon and added Lime reducing the quantity of Lemon, which I prefer……….. YUMMMMMM…!

The trusty Kenwood Chef was used to beat the Sugar/Butter, and also used to mix in the eggs. You might find the mixtures splits during this process, adding a small amount of Polenta will bring it all together. 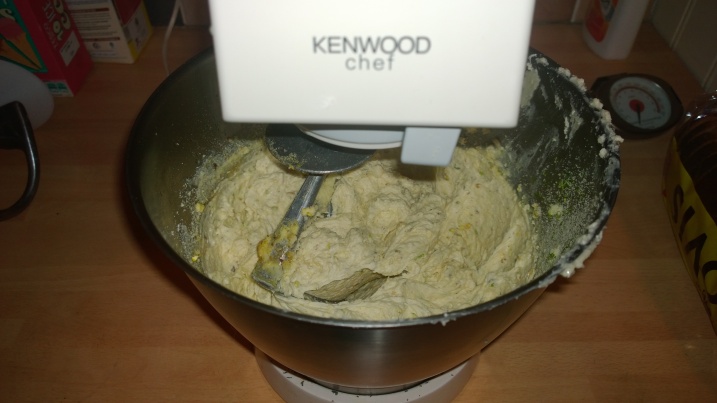 Put all the ingredients for the Syrup in a small saucepan; bring to the boil to dissolve the sugar, then remove from the heat.Remove the cake from the oven; while it is still hot, spoon the Syrup over the cake, I used about 4 Tbsp, judge with the eye.

Allow the cake to cool, then take out of the tin. Coat the top of the cake with the frosting, sprinkle with the remaining Pistachios and gentle press in to fix.

I had one challenge whilst trying to find the Polenta in the shops, a large chain had some Corn Meal, but looking on the side of the Packet, there was the label ‘May Contain Traces of Gluten’. This brand was very cheap and obviously processed in a factory grinding flour and other Gluten laden products. Another higher end shop had Polenta, but it was Organic and very expensive. Eventually I gambled and went for Polenta Express, Gluten Free but apparently the dry grains had been pre-cooked in some way, it still looked and felt like flour/meal and worked a treat.

The cake is quite (well very actually) moist and sticky,  great on its own (as my new friends found out), but also goes really well with a serving of Crème Fraiche or Double Cream.

Feedback from my new team was VERY encouraging, a couple of them have vowed to make it themselves, they loved it so much. Its definitely an ADULT cake, the Pomegranate Molasses used in the Syrup really adds an amazing flavour dimension, the Rose Water is very subtle, and tends to stimulate the nose rather than the taste buds which is what I was hoping for. The Lime Butter Frosting adds another texture and all the flavours work together really well.

Pomegranate Molasses and Rose Water is readily available, I use Steenbergs and Ottolenghi’s to source mine along with the Cardamom.

So there we go, if you know someone with a Gluten Intolerance, and Dairy is not an issue, have a go at this, you will be pleased you did.