The feature image of this post sums up how 6 strangers (well 2 pairs of sisters, Claire and myself!) ended up, if there were 6 Muskateer’s then we were them. We had proved that a bunch of amateur cooks could plate up seriously good food, VERY quickly, even David, our instructor was impressed, Phew…… 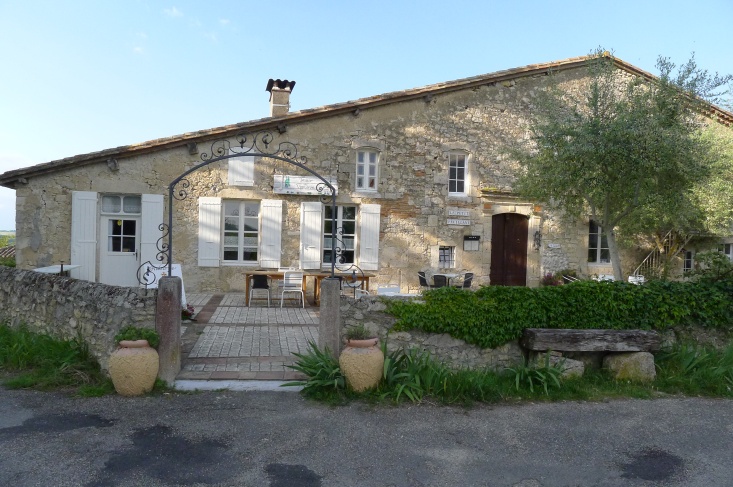 We were coming to the end of the cooking lessons and it was over to the lovely Bernard Corbière, at his restaurant ‘Le Petit Feuillant’ to learn some more skills from the maestro. Bernard is a really really nice, very experienced Chef. Don’t get me wrong, I’m not saying other Chef’s are not nice (David is a great guy too btw!), but Bernard is softly spoken, patient and very kind hearted. If you image 1 person able to cook a 60-70 cover restaurant ON THEIR OWN, without breaking a sweat then that’s Bernard. He was going to share some of his secrets with us, to find out more book yourself on the course, i’m not telling!

During our ‘masterclass’, we learnt how to make the base for a range of deserts in no time at all. The base would last for 5-6 days in the fridge (not in our house I suspect), and could be adjusted for different recipes. I was given the ‘Honour of the Blowtorch’, doing the classic finishing touch to a Crème brûlée, something I had never done before, especially considering the industrial blowtorch that I was using! We also learnt the secrets of making a ‘light’ Chocolate Mousse, it was to be eaten later at lunchtime, yummo.

Following the ‘sweet’ side of cooking we swiftly moved onto ‘Béchamel Sauce’ and learnt some more ‘secrets’, this was proving to be even more interesting that I first thought. After a couple of hours we were back over the road with David and onto the Sugar craft, I did not take many pictures as I was concentrating on not burning myself, 240 degree sugar is DANGEROUS!!

After lunch we set off across the Gascon countryside on a road trip! What I mean is there were several tours that were planned, to expose us to the beauty and history of the local area and its heritage.  A local Mill owned by Mark and Sue, who had joined us for dinner the previous evening which was absolutely stunning and quite a suprise, La Romieu, Château de Larressingle from the XIIIth Century,  one of my favourites (quelle suprise), was the Armagnac Distillery and ‘Le château de Cassaigne’.

We got to taste some  awesome Armagnac which was ‘qualité exceptionnelle’, because our host David is a regular, we ‘skipped’ what visitors would usually taste (which is still good), but jumped straight to an 18-20 year old blend rather than starting at younger distills, Happy Days! A some of my followers know, I am 50 next year and I was able to procure a 1965 Armagnac, the year I was born, (The sad bit is BA lost my bag on the return journey so unless it turns up, I may have to return to buy another, and make BA pay for trip!!).

Le château de Cassaigne also has a working XIIIth century kitchen as well as the Armagnac Museum which we also saw. After the tour we headed back to Gramont for a our  ‘final supper’, it felt a bit like that insomuch as all of us had bonded over our love of food, and shared much laughter during our few days together. 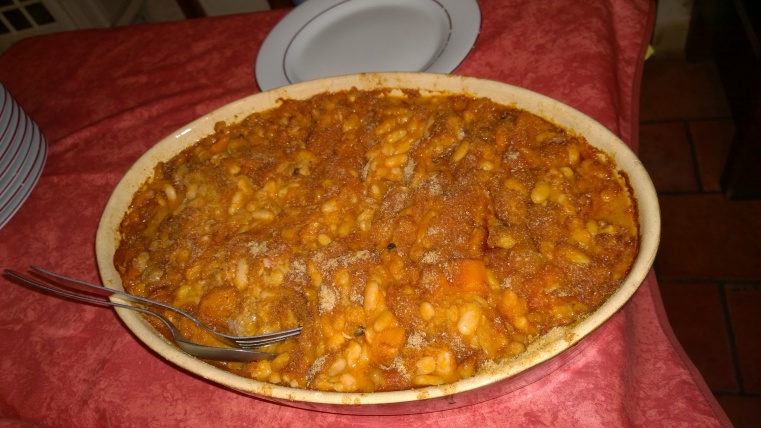 You may recall earlier in the week we made a Cassoulet, it develops even more flavour over a couple of todays and the ‘last Supper’ was to include the dish we had prepared. To finish the dish off, ‘Duck confit’ is added and the Toulouse Sausage/Bean mixture is spooned on top, then the whole lot goes in the oven, sprinkled with some Breadcrumbs.  As the Cassoulet cooks, the fats rises and is soaked up by the Breadcrumbs, making then crispy, it was AWESOME…. I have had a few Cassoulets in my time and this WAS the best.

We finished the meal with a delicious Apple dish, with crispy flaky pastry and ice-cream, the Cookery Course had finished.