I was sitting in Cafe Lucca in Bath and my heart was pumping for a couple of reasons, I had just walked up the hill from the station which is something not attempted before, and I was going to be spending a day learning from a food hero Angela Hartnett MBE, who also happens to have a Michelin Star, no mean feat!

Cafe Lucca was also a new experience, my trip to Bath has previously landed me at the station with just enough time to get a taxi to the cookery school, this time the timetable had changed and I was over an hour early, enough time to grab a bite to eat.

It was a really tasty plateful, Pancetta, Boiled Eggs that had been coated in Parmesan and stuck under the grill, Roasted Tomatoes, Toast and Marmalade with a pot of Assam Tea, it was all very tasty.

I’d been looking at twitter that morning and Richard Bertinet, the owner of the School had been posting the odd picture of food that we would be using that day. A massive crate of wild Mushrooms including Trompette and Girolles, it was going to be a great day. I’d booked this course in May as a Birthday present so it was a long time coming.

So the menu for the day included Pumpkin Tortelli, Partridge with Turnip and Mushrooms and Plums with Ricotta, seasonal dishes that as we found out, would require a lot of skill and technique to prepare, no ready made Pasta, that was to be done by hand along with preparing the Partridges, they were whole, Heads, Wings and Guts!!

Angela is an absolute delight, taking the 12 of us students through the process of making the pasta by hand, understanding the  look and feel once it was ready to roll, cut and shape as required, imparting lots of tips on the way it was great fun. We were grouped into fours and encouraged to interact our group starting chatting away sharing experiences as we went on.

I have made Pasta by hand before in Italy, but it was over four years ago (sorry, my food experiences have meant that I am never trying a particular country or region for that long)! It was a really good session, I had never used a Pasta Machine before similar to others in the group so it was interesting to see the difference not having enough Flour in the mix made, it was slightly too wet and produced interesting results when put through the Pasta machine.

I’d never heard of Tortelli before, they are like a rectangular Raviolli, where you place the stuffing close to the edge nearest you, flip over, egg or milk wash the front and sides, and in between the covered filling and flip over the other side like a blanket, mine were by no means perfect but the looked ok once finished.

Before preparing the Pasta, we had quartered a Pumpkin, seasoned and placed on oiled baking trays for a session in the oven to soften.  Angela encouraged us to answer questions and shared many of the experiences working with the likes of Gordon Ramsey and Marcus Wareing which was really interesting and very amusing indeed !!

I LOVE Partridge, in fact our 11 year old son loves Partridge too, and cooks it himself when available (with parental assistance of course). We were each given one to prep after being shown how to do it by Angela, removing the legs in the right place, (you can go further down the joint towards the body which makes for an unstable cooking experience as it wobbles in the pan)!

Then the Wings, the Head was removed close to the Head, rather than close to the body and the Neck was to be used in the game sauce we were to make. The next bit was interesting, food digestion is a slow process and the cavity between the Neck and the Body contained all sorts of Seeds, bits of food that the Partridge was still ‘processing’. Next the Guts, Heart, Lungs etc. We kept the Heart and Kidney to add to the Game sauce towards the end to add extra richness and flavour.

We were prepping and cooking for several hours, it was hard work but really good fun. One of the students had come all the way from Norway to attend the 1 day course, she owned a Bakery and had been to the school before to learn advanced bread making techniques which the owner Richard Bertinet is a master at, this is an awesome cookery school and Richard attracts some seriously good chefs to come along and share their knowledge and experience.

We worked tirelessly from about 10:00 till 12:30, then a break for refreshments, and a quick snack of Cheese and Ham Toasties with Bechamel using Richards famous Bread, they were very tasty indeed. The ‘Baker Girls’ or Bertinet Backstage are the great team that assist, wash up, clean and generally help things go smoothly and as usual, they did an exceptional job. 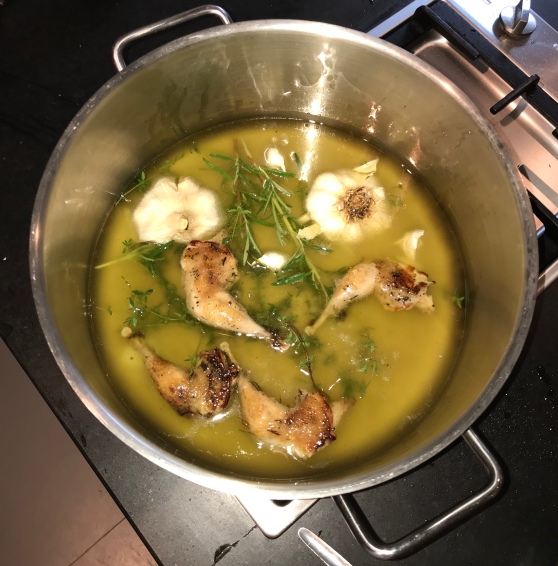 Earlier, we had removed the legs from the Partridge ready for a bath in Duck Fat, Garlic and Thyme, we were going to confit the legs and add to a Salad with Pickled Walnuts. Before the ‘Duck Fat Bath’, the legs were fried in Olive Oil to colour, there was lots going on during the course, loads of different cooking techniques were learnt on the way it was excellent value for money and everyone was sweating in the heat of the kitchen.

The Partridge Crowns got the Pan treatment, in LOADS of Butter and Thyme, a few minutes before hitting the oven for finishing off.

Angela was more than happy for us to video, take pictures, selfies and was a real joy to spend time with, her knowledge and experience is just something  you don’t often get the chance to access, I need to practise my photography from a selfie perspective although we were right by the hob, and everything was hot in the kitchen.

Unfortunately, due to train timetable changes I had to leave earlier than expected and only managed to sit down for the Pumpkin Tortelli starter which was really tasty, I was given some Partridge Breast, some of the Mushrooms, and the Turnip dish we prepared and had them in the evening for tea, very tasty indeed. I really can’t wait to book my next session at Richards Cookery School, its ‘Bloody Brilliant’.

This is the eighth course I have completed at Richard Bertinet’s Cookery School, each of them have had their own qualities, this was equally as enjoyable as the previous seven, but made more special but being taught by such an iconic chef, full of energy, passion and Angela is just a lovely person, thank-you Angela. If you get the chance, just book and your will be guaranteed an amazing time.

A Birthday Treat At the WoodSpeen Nr Newbury

Where to go to celebrate my Birthday? It took less than 10 seconds to reach a decision and a booking at the local Michelin starred restaurant, ‘The WoodSpeen’ was completed online. I’ve eaten here before with a good friend, but only for lunch and we had their lunchtime special which was very good, this time it was to be the ‘Full Monty’ a la carte.

Sat at our table an Amuse Bouche arrived, Courgette Soup with Black Olive. I am not sure about Courgettes, I eat them a lot but they tend to be part of a dish and not going solo, the soup was really very tasty, quite a surprise but a good one. We had been given some lovely home made bread and polished off the dish before more bread arrived, very good attentive service.

For starters I opted for the Roasted Scallops, with Chicken Thigh, Cauliflower and Hazelnut, OMG it was so very tasty. The Scallop was perfectly cooked, the Chicken tender as it could be and really rich the whole dish just sung ‘eat me’.

My partner in crime opted for the Woodspeen Smoked Salmon, Beetroot, Goats Curd and Apple which was apparently delicious and was demolished quite effortlessly, with a big smile of satisfaction to finish.

We were then surprised with another Amuse Bouche, Buratta with Heritage Tomatoes and Olive Crumb, another exceptional taste bomb that really cleansed the taste buds, this was going really very well indeed.

I adore fish and the Bass did not disappoint, with Clams, Squid Ink Gnocchi, Fennel and Champagne Sauce. Everything was cooked perfectly and the Champagne Sauce is THE best I have ever had, seriously tasty and moorish, I could have drunk it out of a cup it was that tasty. 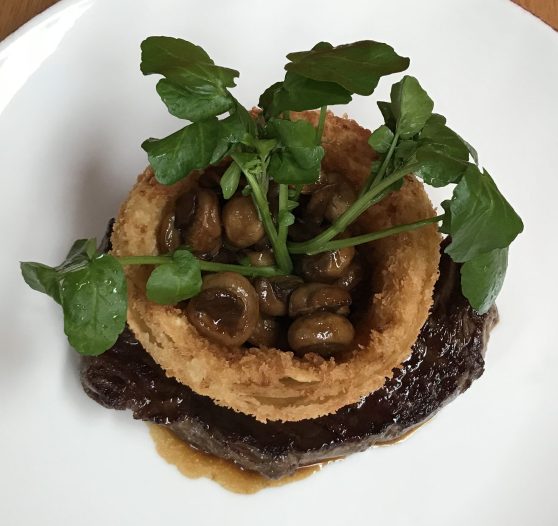 Steak was the choice for Mrs R, with Garlic Mushrooms, Onion Ring, Triple Cooked Chips and Bearnaise. We usually find steaks are ‘OK’, either the meat is not the best or the cooking is not quite right, this was spot on perfect, and the chips, oh my we thought we had found the best chips locally and they are very good, but these WERE the best, praise indeed.

It was my birthday so I WAS having a dessert, the Pina Colada sounded really nice. Coconut Parfait, Macadamia Crumble, Pineapple and Lemongrass Sorbet. I was in heaven, it was yum yum yum the tastes and textures dancing around on the tongue it was a perfect end to a perfect meal.

The Woodspeen is highly recommended, the food is excellent, the service is excellent un-fussy but very attentive, we will be definitely going back very soon.  I think it’s great value for money considering the quality of the service, ingredients and cooking.

Thanks you to the team at The WoodSpeen for making my birthday very special.