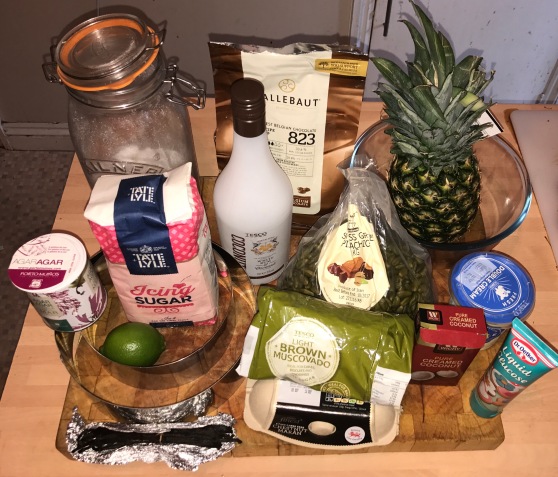 My mojo has been depleted for a few months, close deaths on both sides of the family, our 11 year old who has been unwell for several years has finally been diagnosed with suspected PANDAS (Pediatric Autoimmune Neuropsychiatric Disorders Associated with Streptococcal Infections),  and work has been very busy, which is not a bad thing so my last post was back in June!

I have a treat booked in October, a day with Angel Hartnett at Richard Bertinet’s cookery school so I have decided to try and invent something to try and kick start my mojo again, at least construct from different components so this is the first ‘development’ blog, capturing the good and bad of my foodie experiment. 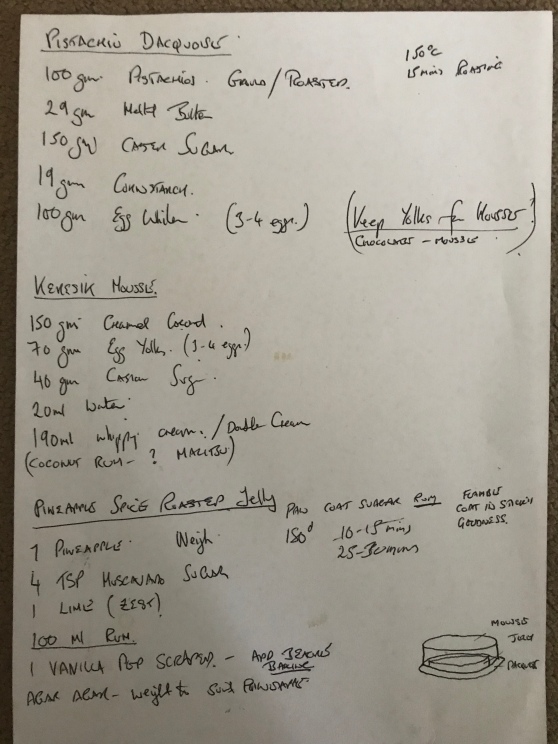 I had a number of thoughts about savoury and sweet and as most of my posts have been on the savoury side, I have opted for a dessert, something hopefully a little bit different, using some of the flavours that I love so much such as pistachio, pineapple, coconut etc. but it needs to be edgy, not out of the box. 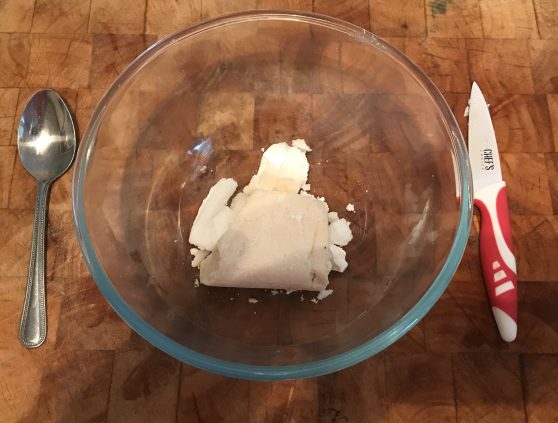 Not so long ago I was in the safe hands of Jackie Kearney on a Vegan cookery course, we used an ingredient in the Green JackFruit Rendang which was called Kerisik. Kerisik is toasted Coconut and a component of Malaysia cooking, I am hoping to visit Malaysia later this year, I remember the description of taking a block of Creamed Coconut, putting it in a heatproof dish like a pyrex, and sticking it in the Microwave on high power for a couple or 3 minutes, stirring, then back in until a deep brown colour. 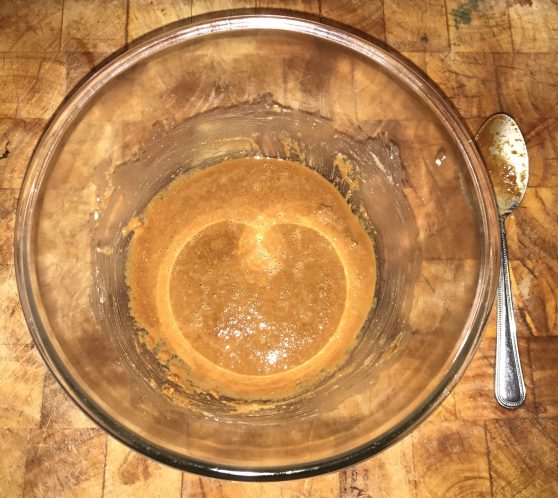 The aroma of Kerisik is amazing, toasty Coconut both rich and slightly sweet. This could be a perfect component for the dessert so a quick tweet to Jackie asking if she had used it in such a way, yes in a ‘Panna Cotta‘ so I decided I would have a go at using it in a Mousse. BEWARE – It very VERY VERY hot so make sure you use a Pyrex or similar.

The Idea and recipe/ingredients further up the page took a couple of weeks to get too. What would the base be, Sponge, Biscuit, Joconde, Dacquoise, Meringue, Genoise the choices are endless. The base also needed to have flavour, Almonds, Hazelnuts, Walnuts, Pecans, Orange, Lemon, Lime, Pineapple?

I opted for Pistachio as I had a large bag in the cupboard and Coconut and Pistachios have a lovely flavour and would work with the Coconut, the base that I have initially opted for is the Dacquoise, like a Meringue but softer and more chewy in texture. 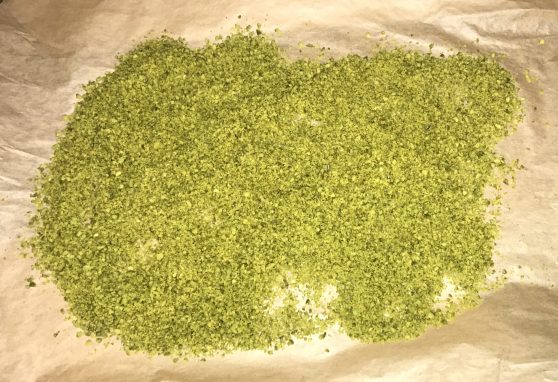 I invested in a bag of really good quality Pistachios a few months back, I use them a lot (when I am cooking and the mojo is not missing!) and recommend The Sous Chef. They were not cheap at £47.50 for a Kg, but the quality is very good and they are skinless so ideal for patisserie with no waste and faffing to get the skins off. You will need 100 grm which need to be processed to a rough powder before roasting to intensify the flavour and remove moisture which you can see above. 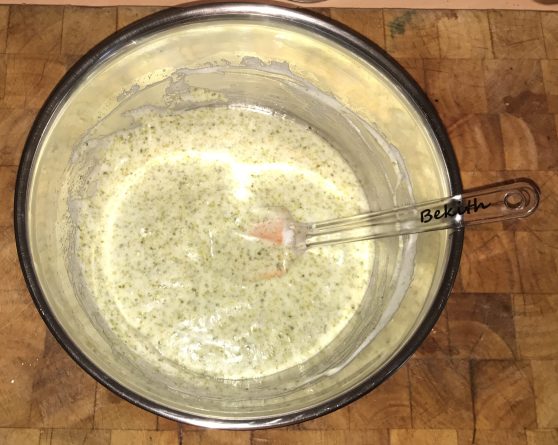 I’ve never made a Dacquoise before and unfortunately got disturbed by an excited son just as I was at what I suspect was an important stage. I had not ‘set’ the whisked egg whites enough and the mixture ended up sloppy rather than firm enough for piping so I am going to have to have another go at this stage of the dessert, that’s development for you! 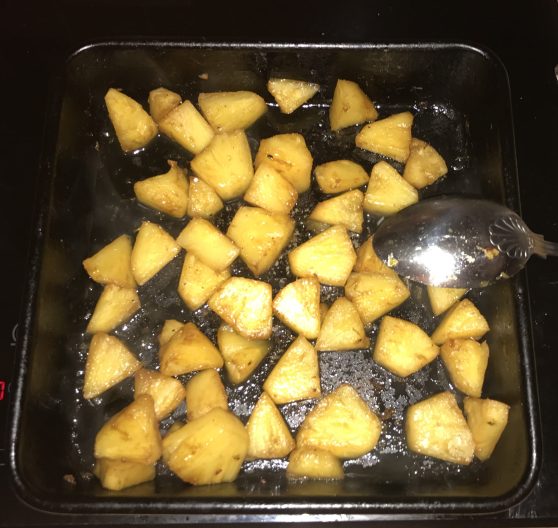 The next thing to consider was other flavours and textures, Coconut, Pistachio and……Pineapple. Not any old Pineapple, this was to be roasted in Brown Sugar, Rum, Vanilla and Lime Zest and made into a Jelly using Agar Agar, something else I had not used before, the idea of this exercise being to teach myself new skills on the way.

Time to finish, I decided that I had learnt enough, made a few mistakes but was a good way forward to creating something really tasty, I had been in the kitchen over 4 hours so I decided to cook the Dacquoise by sitting a large cooking ring on baking paper, and slowly pouring in the mixture hoping it was thick enough not to leak out everywhere!!

The Pineapple was processed in the ‘Ninja’ and set with the correct amount of Agar Agar in a smaller metal ring lined with cling film, and placed on a plate before popping in the fridge to set.

The picture above is of the base and roasted Pineapple Jelly, which was very tasty indeed, although the base was more soggy than chewy the Pineapple Jelly was really very good.

Next time I will be focussing on the base again and looking at making the Kerisik Mousse.