Its been a while since the last posting mostly due to some health challenges which are being sorted, as a result of having to put work on pause, much time has been spent looking at cookery books, watching cooking on T.V. digging for some inspiration to get into the kitchen, and generally ‘chilling’ out (Doctors orders!). My last post was a review of ‘Steenbergs’ Nasi Goreng mix, which had been sent to me as part of a tasting panel and very good it was too. Since then I have also had the opportunity to try their Organic Lemon Oil, in a home made Chilli, you can see the rest of the ingredients below. Apologies for the picture quality in this post btw, its proof that my beloved Nokia Lumia 1020 takes better pictures than an iPhone 6 in kitchen conditions, (unless I am doing something wrong that is)! 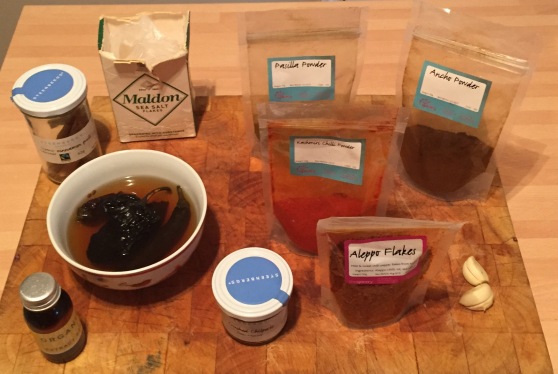 The Chilli was the usual mix of Mince Beef, Tomatoes and a trusty can of those well known Beans but the magic was in the mix of spices above. Five (yes 5) different types of Chilli, both whole (thanks to the South Devon Chilli Farm), dried, care of Steenbergs and The Spicery (who also do Piment d’Espelette, a very special French Basque Pepper) which is quite challenging to get hold of. I might post the recipe one day but its really easy and very tasty so maybe have a go yourself using the ingredients above and just add slowly and keep tasting. The three whole chillies were Ancho Mulato, Chipotle Morita and Pasilla, soaked in hot water for about 20 minutes, I removed the seeds and chopped them up before adding to the Chilli.

Anyhow, back to the Curry and Pilaff, this is where the idea came to try another of the tasting panel samples from Steenbergs, the Fairtrade Organic Earl Grey Tea. I decided to steep the Golden Raisins (Part of the Rice Pilaff), in the Tea, about 1/2 an hour did it becoming soft, juicy and fragrant. The following ingredients will be needed for the Kashmiri Pilaff and was inspired by a similar recipe in Anjum Anands ‘New Indian’ cookbook.

The whole meal takes no more than 30 minutes to prepare, including the ‘Kachumber’ salad side dish. The spices need frying to release their flavours so pop all the spices into a pan with a small amount of Ghee and cook over a medium heat until you can smell the aromas filling the kitchen, about 5 minutes. Next add the handful of crispy fried onion and cook gently for another couple of minutes just to warm through.

In a separate pan you can prepare the Prawn Curry, which is really easy and takes no time at all thanks to Mum’s Masala. The sauce base needs cooking for 5 minutes before adding the Prawns (or other protein), and then cooking for a further 5 minutes, then adding some water as per the instruction on the bottle and continuing until the protein is cooked, it’s as easy as that. I did my usual trick of adding some extra Kashmiri Chilli as I like my food slightly more spicy.

I mentioned ‘Kachumber Salad’ was to be included with this particular meal, a very simple dish mine was a Jack Hawkins Tomato thinly sliced, 1/4 of a Cucumber, de-seeded and thinly sliced, 1 small Red Onion thinly sliced, 3/4 Teaspoon Cumin Seeds, dry roasted in a frying pan, a glug of Rice Wine Vinegar, about 1/4 – 1/2 teaspoon of Kashmiri Chilli powder, 1/4 teasppon of Chilli Flakes and some chopped Coriander leaves, that’t it. 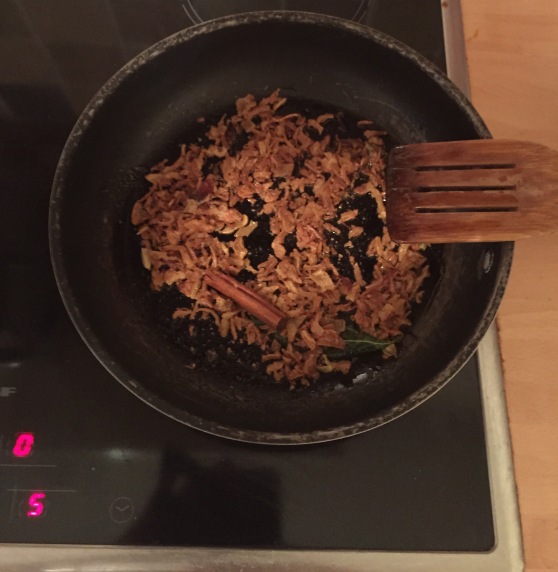 The kitchen should now be smelling very aromatic indeed, the spices nicely cooked, the Onion adding a sweetness and crispy texture to the Pilaff, the next stage is too add the Rice. For speed I chose a couple of packets of pre-cooked Basmati Rice which are easily available and take no time at all to prepare, in this case all we need to do is squeeze each pouch to separate the grains and tip the Rice into the pan, mixing thoroughly with the spices and Ghee.

Almost done now, the rest of the ingredients can be added, the Saffron Milk, Nuts and Earl Grey Tea steeped Golden Raisins (remember to drain the Raisins 1st, you don’t want to add the Tea into the Rice!!).

So it seems the Saffron is quite significant, which I found out whilst doing my usual research for this post. This saffron comes from a women’s association in Afghanistan which is promoting growing  saffron as a viable alternative to opium growing. Now that’s really cool, but there is another twist in this story which only became clear when I looked at a map of the region. Kashmir is the north western region of South Asia and borders Afghanistan so geographically related, not something I had realised when I started this tasty dish. 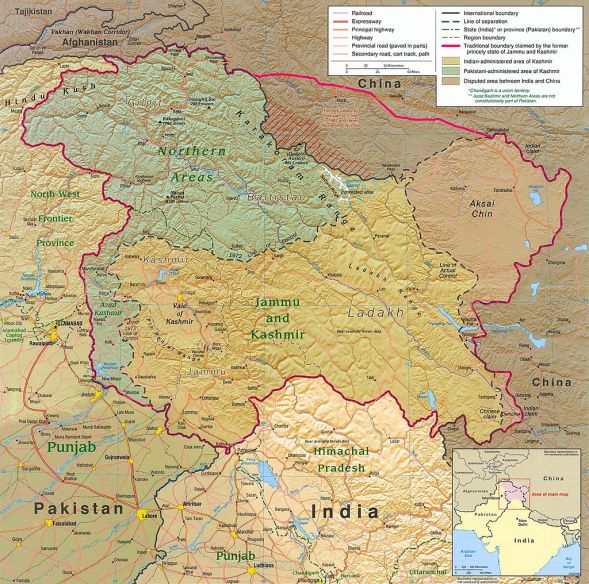 So there you have it, once you have added the rest of the ingredients you only need a couple more minutes and everything is good to go. Again apologies for the pictures, I will be going back to the trusty Nokia in future as the results are some much better,

The Kasmiri Pilaff was delicious, had good texture and the Earl Grey steeped Raisins were amazing adding a slightly fruity shot of flavour with a citrus note. The Curry was as good as before and the Kachumber salad provided some contrast and a cooling element. In fact the mixing of hot and cold temperatures and sweet and spicy food works extremely well, as I have found out before with an Ottolenghi inspired dish that I did last year.

So thanks to Anjum (and Rick Stein for the Kachumber), have a go, it’s delish.

So the Saffron is quite significant, which I found out whilst doing my usual research for this post. This saffron comes from a women’s association in Afghanistan which is promoting growing  saffron as a viable alternative to opium growing. Now that’s cool, but there is another twist in this story which only became clear when I looked at a map of the region.Kashmir is the north western region of South Asia and borders Afghanistan