Hugh Fearnley-Whittingstall is on, streaming to my iPad as I pen the 1st blog of 2018. River Cottage HQ is about to open and rather than let one of his prize pigs go, the menu will be based on Beef rather than Pork, along with an Asparagus starter, all 40 portions. Fish is also on the menu, trying to find a ‘monster’ Lobster in the locale fails and it’s actually a massive Conger Eeel that ends up on the plate! 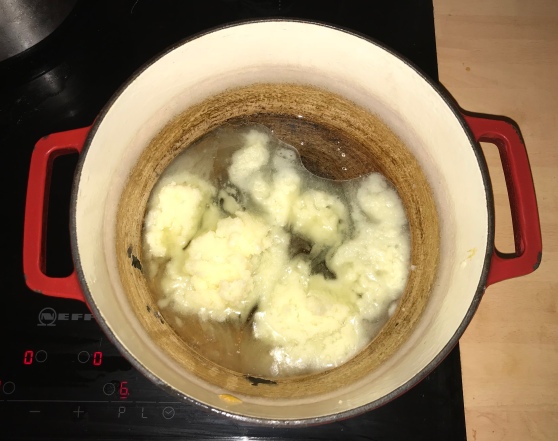 I have very fond memories of past trips to the South of France where my brother lives, the preferred time being late Autumn when the Olive picking season is in full swing. He has some trees in his garden and the process of picking and taking down to the ‘Olive Pressing Co-Operative’ is an annual ritual. It was during one of these trips that I discovered ‘Rillettes’, similar to Pâté it’s rich, fatty and delicious spread on crusty Bread.

You can buy it in a ‘well known higher end super market’ but at over £2.50 for 110g its not cheap, so why not have a go at making it myself! At a recent cookery class at my favourite school ‘Richard Bertinet’s’ we had some Rillette’s and after asking, Richard was more than happy to share the recipe, it’s in one of his books ‘Cook: In a Class of Your Own with Richard Bertinet’ published in 2010 and subsequently I found a second hand copy in excecllent condition, complete with CD, It’s now sitting on the shelf along with Crust, Dough etc. I think I have all of his books!

Taking 1Kg of cheap pork cuts (shoulder and belly), and some Duck or Goose fat a very slow confit takes place over several hours, the addition of flavours such as Garlic, Thyme and Rosemary add extra interest to the final dish.

You might find, as I did that the Pork had not broken down completely due to the low and slow process (3 – 3/12 hours give or take), the temperature was not high enough to break down the connective tissues so I turned the heat up a bit and within 30 minutes the job was done. 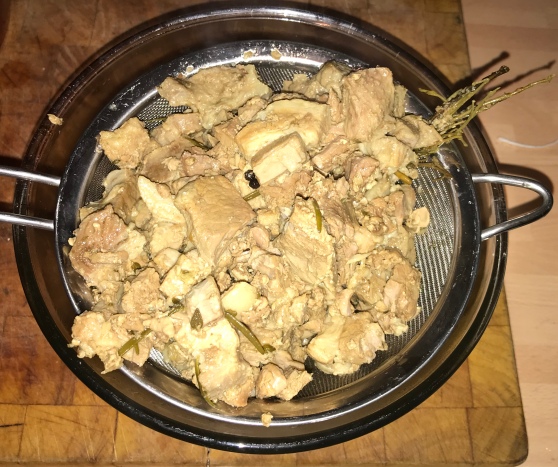 At this stage you will need to KEEP the cooking fat AFTER draining it, don’t throw it away, it’s integral to the dish!! The Pork does not look particularly tasty at this point but carefull pulling and tugging to seperate the meat from any unedible bits and we are nearly there. 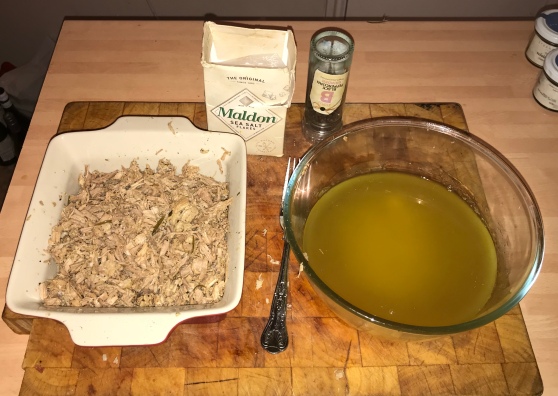 Given some time to cool a bit you will have a dish of ‘pulled Pork”, the drained and strained Fat, and Salt and Pepper. I added 60%-70% of the fat into the meat before starting the next process, I did warn it’s fatty stuff but believe me, it’s delicious and you don’t have it that often.

This dish needs LOADS of seasoning, you will need to add, taste, add, taste, add and taste until that magic moment happens and you pallette will say YEEEEEESSSSSS.

I had some Kilner jars which were sterlised in the oven for about 20 mins at 115 degrees. In Richard’s book there is a section where it talks about various ways of potting the Rillettes but you will have to invest a few pounds to find out like I did, it’s worth it, it’s a very good book with lots of hints and tips.

Once the Rillettes is packed into the jar, some of the Fat is poured over the top to seal in the goodness before adding the lid and popping into the fridge to cool down, job done.

We tried some a couple of days later, my in-house taster agreeing that it was amazing and took us both back to fond times in southern France. The cost worked out out just over £1 per 100g and I had just over 1Kg worth sealed in the fridge for the future.

So, back to Malaysia and a trip to Tamarind Springs, a lovely restaurant about 20 minutes outside the city. We arrived on the Harley-Davidson motorbikes we had spent the morning on, touring the sites with the Police escort which I still keep thinking about. 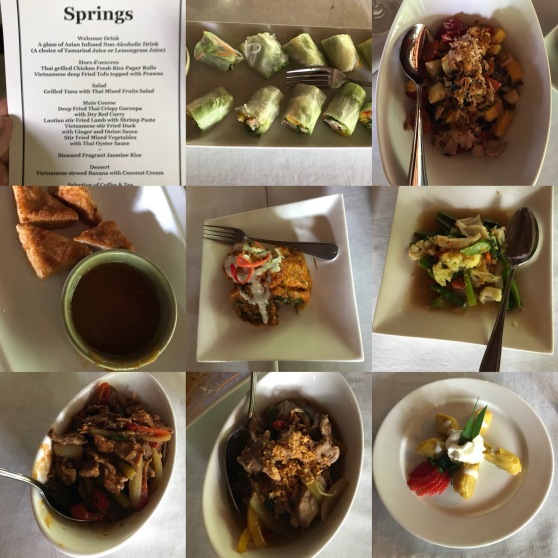 The dishes were varied and delicious taking in Thailand, Laos and Vietnam tastes dancing over the pallette. During lunch we had a tropical downpour which was a welcome release from the heat, it poured it down.

The restaurant was very good, friendly service and awesome food, another experience that will not be forgotten.

The following day we were on the island of Langkawi and had some free time to wander around. A group of us hired a taxi for the most of the day and toured around the island a bit which was great fun, especially finding the hawker stalls selling home made fresh food to passsers-by.

That’s it for now, I hope you have a go at the Rillettes recipe, it’s very tasy and really quite easy to make.