You would think making a Chicken Curry would be simple, Nah……..

I had planned to make some Paratha’s to go with a Desi Murgh I was going to attempt, hence the flour in the picture above, it never happened but I promise to re-visit Paratha’s another day.

The week was rather busy, I meet a new bunch of people I am supporting in my day job and ended up in a fantastic Greek restaurant in Weston-Super-Mare called Demetris, the ‘Sheftalia’ was delicious and the ‘Stifado’ was that good, I got several pats on the back for finding such an amazing restaurant with 5 minutes notice.

The following day I was at a RNIB (Royal National Institute for the Blind) home with some other team mates, doing a days charity work helping get the garden in pristine condition, a really worthy graft albeit left with aches and pains in places I did not know existed.

Back to the kitchen and Desi Murgh, a traditional dish from Southern India. According to the research I did whilst preparing this beauty it used to be a dish for a special occasion, as large scale chicken production did not exist and Chicken was expensive. The reference to ‘Yardbird’ in the title, is that in the Deep Southern states of America, a Yardbird was another name for Chicken, but elsewhere it was a term for a prisoner!!

I have been fortunate enough to attend two 1 day cookery courses with the Lovely Sumayya Usmani of My Tamarind Kitchen, she is currently writing her first cookery book which is due to be published later this year. I learnt to cook Onions the proper way on this course, which you need to do for this dish. 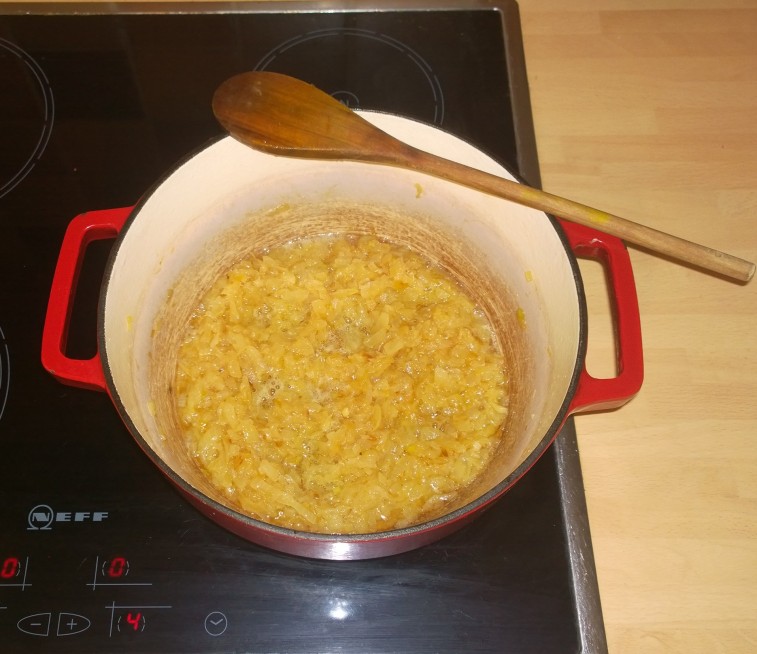 The recipe is easily available via google, mine came from a book from Indian Chef Vivek Singh, its purely a co-incidence that he is appearing on Sunday Brunch as I am writing this post, he is one of the UK’s best in Indian cuisine!!

The Onions take about 30-40 minutes to cook, its not a five minute job. The trick is to use your eyes, and cook until you see the Oil separate and then add a little water and carry on cooking, stirring to make sure the Onion does not burn on the base of the pan.

You need to hold your nerve with this process, it seems as if you are cooking the Onion to within an inch of its life, I used two large Onions and by the time the cooking process has finished and you have essentially cooked all the moisture out of the Onions, there is not that much left. 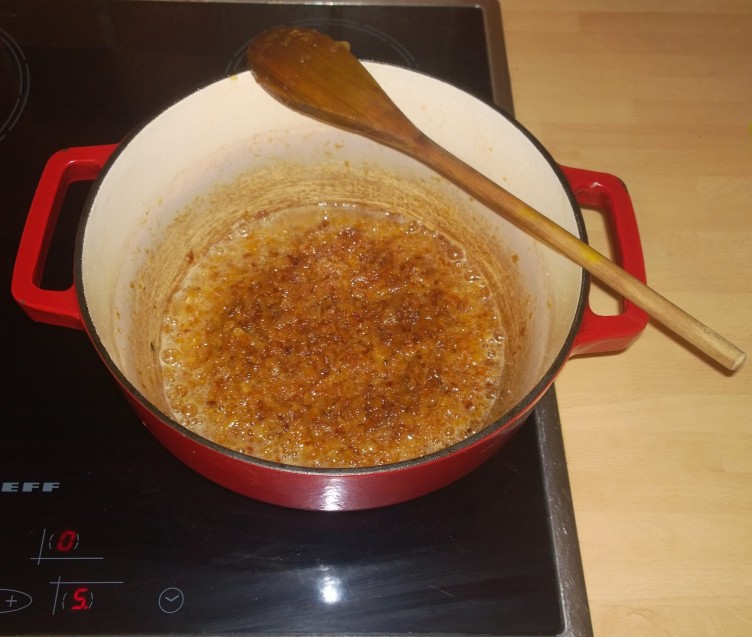 Once you have passed the ‘Deep Brown’ stage, set aside to cool down and then blitz in a food processor or use a ‘Stick Blender’. You will have a delicious deep sweet base for the Desi Murgh, and many other Indian dishes as this technique is used a lot.

During the Onion cooking stage take your Garlic and Ginger and make a paste, I used about 5 Garlic Cloves and 1 1/2 Inches of fresh Ginger, delicious.

This needs cooking out, see above, before adding the Onion Mixture and cooking for 5- 6 Minutes making sure the ingredients are thoroughly combined.

The kitchen will start to fill with amazing aromas by now, adding the rest of the spices like Coriander, Cumin, Turmeric, Black Smokey Cardamon, Kashmiri Chilli, cooking each one out to remove the powdery taste. A Bay leaf finishes this stage of the cooking.

Next, Tomatoes are added cooking the sauce base until the Oil splits from the rest of the mixture. I did not have fresh so used a tin of chopped tomatoes which were in the cupboard. Finally add some Yoghurt as per the recipe. 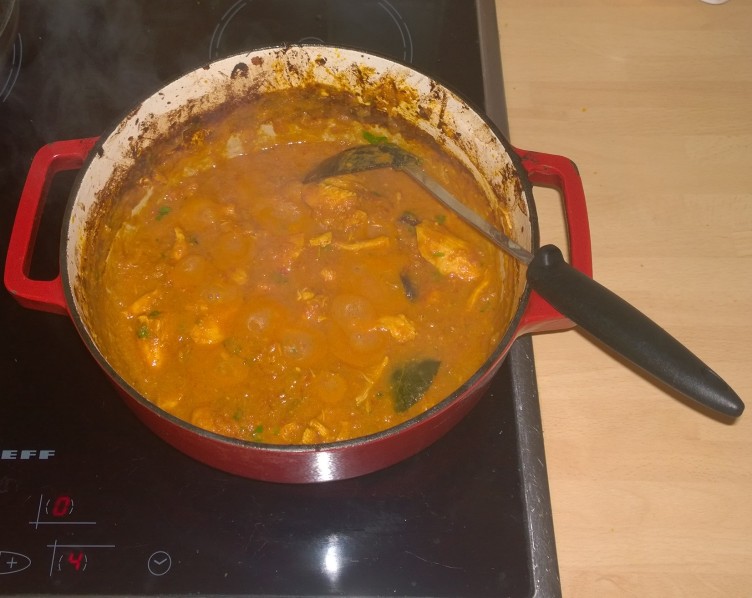 Chicken is the protein in this delicious dish, slow cooking for about 45 minutes use whatever you have to hand, Thighs, Breast (cut into chunks) or Legs its up to you. I put mine on the oven on about 150 degrees with the lid on. Make sure the Chicken is cooked if you are using larger cuts with the bone in. 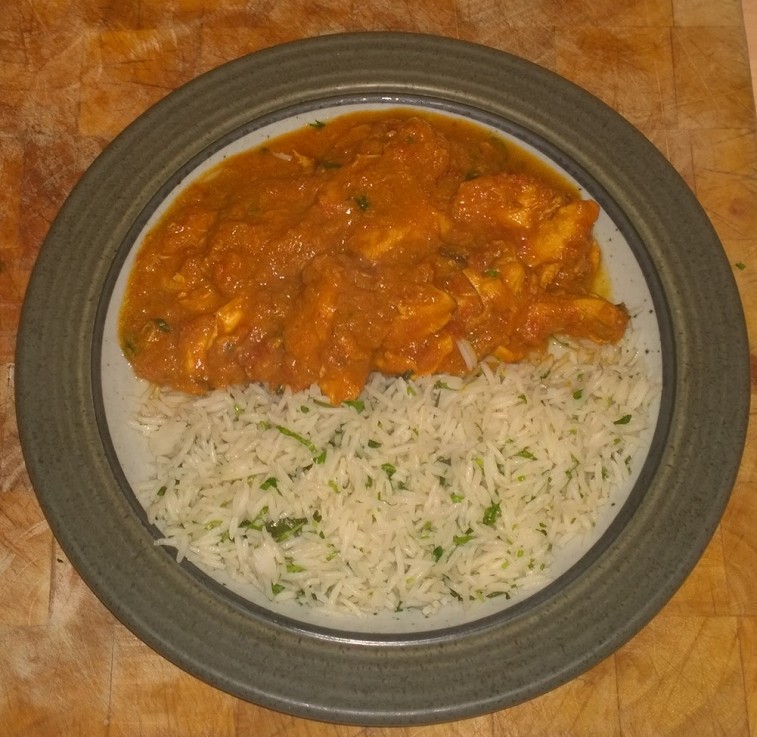 At the end, add some fresh Coriander and cook on the hob for a further 10 minutes until the Oil splits out again.

I served the Desi Murgh with some Basmati rice that had been flavoured with Clove, Cinnamon, Green Cardamon, roasted Coriander Seeds, I guess it was Pilau Rice without the colouring, a ‘flourish’ of fresh Coriander was also added, I love the stuff!!

It takes a while to prepare this Desi Murgh but the results are delicious, if you like your food a bit hotter, add extra Chilli Powder as the dish is mild and fragrant. Its supposed to be quite a ‘wet’ curry so some Indian bread would go well, I was too tired after a busy week so fried some Popadoms instead!